KJB - Book That Changed The World 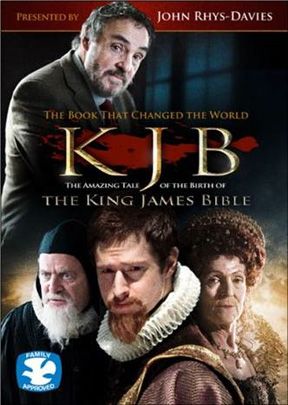 Acclaimed actor John Rhys-Davies hosts this extraordinary story behind the best-selling book in the world -- the King James Version of the Bible.

Acclaimed Actor John Rhys-Davies visits landmarks, explains relics and leads us back into a darker time to discover this fascinating tale of saints and sinners, power and passion, as the greatest translation of Holy Scripture emerges into a world and culture that would never be quite the same again. This DVD is a colorful and historical look at the origin of the King James Bible. Presentation features excellent production values.

Received the Dove Seal of Approval. 5 out of 5 Doves!

Historical documentaries inhabit two worlds as they blend entertainment and information. In the world of the written word—strong in its ability to convey information—the artist always faces a challenge to appeal to readers’ senses and arrest their attention. In the world of dramatic film— with its ability to portray action, convey tone of voice, and deliver visual and audio stimulation— the artist faces a challenge to slow down enough to engage the brain along with the eye and the ear. Two new films on the King James Version tilt in opposite directions as they try to exploit film’s possibilities while teaching viewers about a monumental 17th-century event. KJB: The Book that Changed the World (Lionsgate), produced and directed by Norman Stone (Florence Nightingale, C. S. Lewis: Beyond Narnia), tilts toward arresting dramatic reconstructions. Robert Cecil cajoles the aging Elizabeth and orchestrates the transition to the newly crowned James I. Young James spars with his strict Calvinist tutor about the observance of Epiphany. The newly crowned James I colorfully abuses both bishops and Puritans at the 1604 Hampton Court conference. (Luther-like, James calls the Puritan requests “a litany of dullness blown out your buttocks.”) The film capitalizes on dramatic developments (which keeps it from exploring historians’ challenges to the story that the Gunpowder Plot conspirators tried to tunnel under Parliament). Colorful host/narrator John Rhys-Davies (The Lord of the Rings’s Gimli the Dwarf) intensifies the drama with his grand manner. For all its theatrics, however, the film doesn’t show the drama of translation itself. For that, we have KJV: The Making of the King James Bible (Vision Video). With a minimum of historical context and at only half the length of Stone’s 90-minute treatment, KJV: The Making of the King James Bible provides text samples from the Bishops’ Bible (a lazy translation from Elizabeth’s reign), the Geneva Bible (a rigorous but agenda-laden translation built on the foundations of William Tyndale), and the Latin Vulgate (the 1,200-year-old official Catholic Bible). In Psalm 23, does the Lord lead me as a shepherd? Or does he rule me? In I Cor. 13, does Paul praise the virtues of love or of charity? Theology and political philosophy will color the expectations of the translator. Are society’s leaders to exercise care or dominion? Is the Christian life about affection or good works? The choices favored by the Puritans, says Adam Nicolson, author of the 2003 book God’s Secretaries, are deeply subversive. Nicolson is one of the best things about this film. Each documentary has its lineup of experts, but Nicolson’s wit and chipmunkish charm trumps them all. While Stone’s film plays Bishop Richard Bancroft as a scheming comic villain, Nicolson roots Bancroft’s ruthlessness in his rough, rural Cumbrian origins. While Stone presents a James who protects his power by imposing his will on the competing religious parties, Nicolson gives us a wily James who grants the Puritan leader John Rainolds only one request—a fresh translation of the Scriptures— and then hands the Puritan project to Rainolds’s nemesis Bancroft for implementation. By forcing the parties to work together, he hoped to bridge the gap. The triumph of the KJV, both films point out, was more in its craftsmanship than in its popularity. It took a nation torn by civil war and wounded by both monarchist and Puritan excesses to embrace the KJV some 50 years later as a symbol of religious unity.

most real vision and true history of the only correct and true bible available today outstanding !!!!!!!

most real vision and true history of the only correct and true bible available today outstanding !!!!!!!

Gail Bergman - KJV A Book That Changed the World!

This movie is an incredible depiction of what it was like 400 years ago in the church in the U.K.. The scenery costumes and cast made quite a realistic backdrop. I particulary liked the narrator as he weaved the whole story together.I highly recommend this movie to lovers of the King James Bible as well as Biblical scholars who want to see at what great lengths the Lord went through to preserve His true Word. Enjoy!

Pat Newbold - KJB the book that changed the world

I thought this would be a bit dry, I'm an NIV person myself! But it was a fascinating and gripping account of the history and religious background that led up to the new translation. From Queen Elizabeth 1 to the Gun Powder plot. What a remarkable chap James was it couldn't have been done without his foresight wisdom and scholarship. I see it in a new light! Thoroughly recommend it for Christian and non-Church groups alike.

Eddie Smith - the book that changed the world

Excellent material. Should be watched by anyone deciding to buy a Bible. Great acting and informative facts by narration. 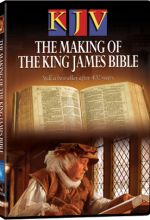 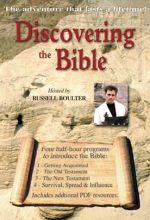