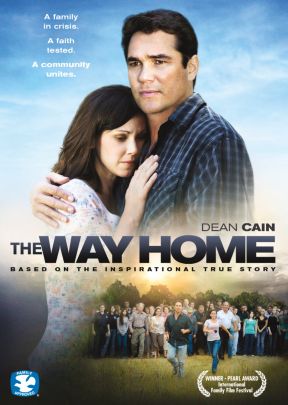 Dean Cain stars as a husband and father torn between the demands of his job and commitment to his family.

Dean Cain (“Lois & Clark: The New Adventures of Superman”) stars as Randy Simpkins, a husband and father torn between the demands of his job and commitment to his family. Asked by his wife Christal to watch their two-year-old son Joe for a few minutes, Randy is distracted by work and Joe disappears. Racked by guilt, Randy joins Christal in a desperate search for their missing son alongside hundreds of others from their church and community. Randy and Christal’s strained marriage must now weather the ultimate test—the potential loss of a child. THE WAY HOME is the story of Randy's powerful spiritual journey back to love, faith and a Godly understanding of what must always take first priority in a man's life -- his family.

This tear-jerker is based on the true story of a work obsessed father whose two-year-old son disappears while he is momentarily distracted. The entire community rallies to search for the child. The support of the Body of Christ is exemplary, but the first half of the movie drags and jerks along with too many people and too little change in the action. Ultimately, the Lord answers the many prayers for the boy; and he is found unharmed and returned to his family. His father sees the error of being a workaholic and commits himself to changing his priorities.

Though this film received the Dove Family Approval Seal, I cannot recommend it. The story starts with the two-year old playing with his toy gun. He holds it in his mouth, then takes it out and aims at his father. At the end of the story, his mother comments that her son got lost when he took his gun to "shoot: his grandfather's cows. Given today's problems with guns, we should not applaud a movie depicting a two-year old obsessed with his weapon.