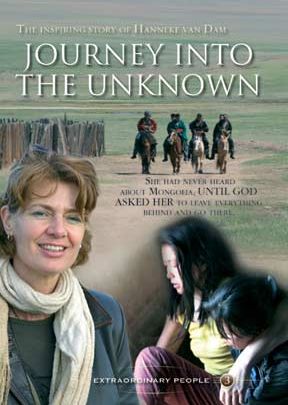 ﻿Hanneke is working as a child psychologist at the courthouse in Amsterdam. One day she is convinced that she has heard God's voice to give up her job, leave everything behind and move to Mongolia. Mongolia? She did not even know where to find it on the map! This is the start of a long journey with seemingly no end.

Mongolia is one of the coldest countries in the world. The majority of men are alcoholics, causing violent behavior and disrupting family life. Hanneke now lives in Mongolia, giving of herself to those who need it most. She has left everything behind to pursue her calling and journey into the unknown.

That unknown brought her into direct contact with struggling and broken lives. We live with her through moments of great triumph as well as heartbreaking failure. One viewer describes it as "an experience of humanity at its most basic level." Widescreen.

Hanneke van Dam worked as a child psychologist at the courthouse in Amsterdam, Holland, when she heard God's voice asking her to give up her job and move to Mongolia, leaving behind everything she had and everyone she knew. When she experienced this request Hanneke didn't even know where Mongolia was on a map. But she felt obliged to carry out God's mandate for her and went. When she got to Mongolia (an adventure in itself) she found herself in one of the coldest countries on earth where the majority of men were alcoholics, fueling violent behavior and disruptions of family life. Journey Into The Unknown: The Inspiring Story Of Hanneke van Dam is a 52 minute, full color, DVD documentary of a most remarkable women who now lives in Mongolia, giving of herself to those who need the Christian message. We learn of successes and failures as she works with the struggling and broken lives of men, women and children. Very strongly recommended viewing for adolescent and adult members of the Christian community, Journey Into the Unknown is a testament to the power of faith and the willingness to obey God's calling into service as a stranger in a strange land.

A true story about courageous Hanneke van Dam, a child psychologist working in Amsterdam who hears a voice telling her to give up her job and move to Mongolia, one of the coldest countries in the world. She is a missionary to people with "struggling and broken lives." The video shows the problems many living there face with alcohol, broken homes and no money for their families. The video gives us insight to people in Mongolia who are in the depths of poverty. I would like to have seen more about the experience of an individual family portrayed over a longer segment of time as van Dam worked with them. Adult and children's Sunday School classes would be encouraged to now van Dam is helping and loving the people there. Information about the production and web site address is on the DVD.

Psychologist Hanneke can Dam left a comfortable life in Amsterdam to follow God's call to serve humanity in Mongolia under the aegis of Help International Mongolia. In this deftly produced documentary, we follow Hanneke's efforts as she works with people and shares the word of God -- first in the city of Ulan Bator, a place of subzero temperatures and a large number of alcoholics, and later in the remote Hentiy province, where she single-handedly establishes a mission post. Journey Into the Unknown, captures both Hanneke's warmth toward the needy and the vicissitudes of simple survival in this wild, beautiful, and daunting landscape, documenting her modest successes and eloquent insights. In the end, Hanneke remains a willing servant of God, although she ponders the price paid for leaving her comfortable existence,and while no conclusions are drawn regarding what may lie ahead for Hanneke, she urges viewers not to be afraid to heed the missionary call. An inspirational title that will be particularly appreciated by anyone contemplating mission service, this is recommended. - J. Reed

Journey into the Unknown is an inspiring story of great faith. Hanneke, a Dutch woman, was praying one day as she vacuumed her mother's floor, asking, "God what can I do?" God answered, "Mongolia." Formerly a child psychologist in Amsterdam, Hanneke wasn't sure. Where was Mongolia? Showing her great faith and her desire to be an instrument of God's Love, Hanneke contacted a faith-based mission organization, packed up her things, and left for that unknown country. This DVD picks up the story at a point where Hanneke has been in Mongolia for several years. She has developed relationships with many of the people. She shares the troubles that many in Mongolia have: poverty, alcoholism, violence in the family, and broken homes. She tells about the work she does and how she hopes to show these people, these new believers, how to reorganize their lives to glorify God. There is much work to be done in Mongolia. Much of Hanneke's time is spent praying for people who are sick and providing baths and hair cuts to the poverty-stricken people of one particular town. Sometimes, she just picks drunks up off the ground and takes them to a warm place. It is sad, but true, that many of the Mongolian men are alcoholics; they'll get drunk and fall asleep on the street. Hanneke explains that, because of the extreme cold, they can die within a few hours. Hanneke is a truly inspiring woman and this is an excellent production. I recommend Journey into the Unknown for families or groups that want to learn how others are sharing God's Word around the world. Certainly, anyone thinking about going on a mission should watch this DVD; it will inspire you to make the commitment and go. The work is so rewarding and so needed. Reviewed by Kate O'Mara Eclectic Homeschool Online.

Wonderful story of an examined life -- one with so much -- who made the choice to give it all up to pursue God's Will in her life. In the small portion of her life covered in this film, we see just how much positive effect she had on the people with whom she went to share God's Love. <p> However, we as humans can only do so much, given our limited time, energy, & resources; those to whom we witness still have their human weaknesses and God-given will to chose which paths they follow. Unfortunately, Hanneke seemed very distressed that in the end, it seemed she had "failed" in some regards. But I ask, by whose standards? She did all that was asked of her with what she had, and accomplished much success at that. Those instances where she felt she had failed were in reality the results of others' choices to follow the wrong paths... or not failures at all, but rather simply ongoing problems that will require more time, energy, and resources. Even God does not require perfect success of his servants in all service, all the time. Hanneke should feel secure in knowing she did and is doing her best to further the Will of God, and that both He and those to whom she witnessed see her efforts as hugely successful and worthy of respect and praise (and emulation by others). I wish I could tell her that myself, and hug her and all the people she so richly blessed with her tireless service to the glory of God. I'm sure they would feel the same way about her! :~) In that light, it's an important lesson to learn for all who would serve God, lest they also feel the lack of success in *all* their efforts comes about from their own personal failures. It may just *not quite* be "God's time" yet.

Larry Courtney - Touched by an Angel !!!

I happen to see this documentary the other night on a local Christian TV network and was so moved by it. This beautiful angel,(angel means "messenger of GOD", touched my heart. I found myself wishing I could be there with her helping her with these precious people. This movie is to be recommended to any youth group, adult group, anyone thinking of becoming a missionary or an evangelist. God bless Hanneka and the people of Mongolia. 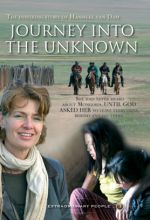