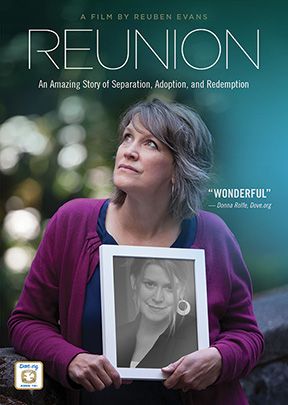 Reunion tells the amazing story of Kim and Duane Copple and their daughter, SaraAnn Evans. Kim became pregnant as a teenager and chose to give SaraAnn up for adoption. But 25 years later parents and child were reunited. Learn about their emotional journey and see how God brought two families together through adoption.

﻿Reunion is an engaging personal story of loss and redemption told by the people who lived it. When Kim was a high school senior, she became pregnant by her boyfriend, Duane. While the couple would one day marry, they were not ready for that commitment at the time, nor were they ready to take up the responsibility of raising a child. So, they made the heartwrenching decision to place their daughter for adoption. Twenty-five years later, Kim and Duane reunited with their daughter, SaraAnn. Experience the emotional roller coaster that finally resulted in the reunion of parents and child, and witness the loving connection between SaraAnn’s biological and adopted families. Widescreen

Reunion is a heartfelt documentary that is filled with the testimony of Kim and Duane Copple. The couple has a wonderful Christian background and they tell of their life as it progressed through the years. They dated in high school and although they were Christians the unexpected happened, a pregnancy.

They believed that God had a plan for their baby and the decision was made to give their daughter up for adoption to a good Christian family. Years later the Father above had a new plan for all those involved as the two families meet and discover the fulfillment of love that the Copple’s decision had on both families.

This film shows that even in the faithful sometimes things happen but with prayer and God’s help there is a plan set in motion that may be not understood at the time but it will bear fruit. It is a wonderful faith-based testimony of love, the presence of God in people’s lives, and making the right decision for others.

We present this documentary the Faith Friendly Seal for 12+ due to the topic of discussion.

In this documentary by Reuben Evans, Oregon couple Kim and Duane recount their experience as teens, when Kim became pregnant and the pair eventually gave up their daughter for adoption by a family in Seattle. Kim and Duane would marry and have more children, raising a family of their own. Years later, that first daughter, SaraAnn, tentatively reaches out to them via the Christian agency that brokered the adoption, and in time both families build a relationship that is heartening to see. A religious documentary, Reunion reminds viewers of just how flexible and emotionally durable people can be in the midst of a crisis, while also underscoring the concept that while situations may change, real grace and love can be enduring. Recommended.

What a beautiful touching film and wonderful example of God's promise and faithfulness. I'm thankful that this story was documented to share with others. 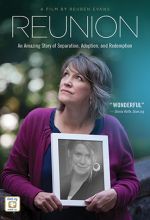 Reunion tells the amazing story of Kim and Duane Copple and their daughter, Sarah Ann Evans. Kim became pregnant as a teenager and chose to give Sarah Ann up for adoption. But 25 years later parents and child were reunited. Learn about their emotional journey and see how God brought two families together through adoption.