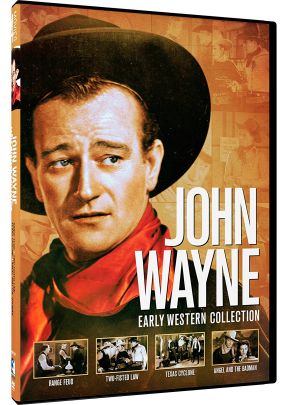 Saddle-up for a ride through The Duke's early years in this two-disc set of four movies:

Range Feud (1931) Not Rated, B&W - Wayne makes a very early appearance as a ranch owner's son falsely accused in the murder of a cattle rustler. Just as the Duke is about to get his neck stretched by an angry mob, Jones rides in and reveals the killer's true identity. Also starring Buck Jones, Susan Fleming, Ed LeSaint, William Walling, Wallace MacDonald, and Harry Woods.

Two-Fisted Law (1932) Not Rated, B&W - Tim McCoy is a rancher who borrows ten grand from Oakman. It turns out Oakman is a land grabber who lends money and rustles cattle so ranchers can't pay back and lose their land. With the help of a sheriff's posse McCoy captures Oakman, ending his evil reign in the valley. Also starring Alice Day, Tim McCoy, Walter Brennan, Wheeler Oakman, Tully Marshall, and Wallace MacDonald.

Texas Cyclone (1932) Not Rated, B&W - A cowboy (Tim McCoy) rides into a strange town called Stampede and is mistaken for a rancher who disappeared five years before, and who is thought dead. A head wound restores his memory and proves him to be the missing rancher. Also starring Tim McCoy, Walter Brennan, Shirley Grey, Wheeler Oakman, and Wallace MacDonald.

Angel and the Badman (1947) Not Rated, B&W - Quirt Evans, an all-round bad guy, is nursed back to health and sought after by Penelope Worth, a Quaker girl. He eventually finds himself having to choose between his world and the world Penelope lives in. Also starring Gail Russell, Harry Carey, and Bruce Cabot.