Highway To Heaven: Season I 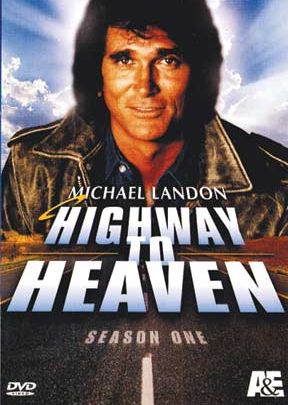 Probationary angel Jonathan Smith (Michael Landon) launches his campaign to earn his wings by performing good deeds on earth as Highway to Heaven begins its first network season. Jonathan is accompanied on his journeys by rough-edged former cop Mark Gordon (Victor French), who, though still alive, can be just as much an "angel" as his celestial companion (and will be referred to as such in the individual episode synopses, for the sake of brevity). In the series' opening two-hour episode, Jonathan establishes his habit of taking odd jobs in places where his services are needed most -- in this instance, a dismal retirement home where the residents are in dire need of some cheering up. In subsequent episodes, Jonathan and Mark patch up several broken families: A minister estranged from his single-mom daughter, a movie star who tries to substitute money for love in dealing with his children, a burned-out country & western singer reunited with the husband and daughter whom she ran out on years earlier, an American teenager who refuses to accept the fact that he has a Vietnamese half-sister, and so on. They also find time to battle drug dealers and street gangs, melt the heart of a Scrooge-like used-car salesman during the Yuletide season, come to the aid of an illiterate high-school basketball star, and convince a quadriplegic named Scotty (played by semi-regular James Troesch) that he will find the love of his life despite his handicap. On his own, Jonathan falls in love with a mortal woman while trying to steer her son away from big trouble while Mark flashes back to the events of his own childhood and in so doing saves his grandfather's ranch from foreclosure. The season ends with the two-part episode "Thoroughbreds," guest-starring Helen Hunt as a stableman's daughter who falls in love with the son of her dad's millionaire employer. By the time this episode aired, Highway to Heaven was the 19th most popular network program on the air.