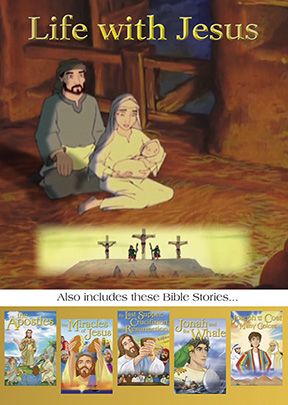 This animated 6-movie pack includes these Bible stories: Life with Jesus, The Miracles of Jesus, The Apostles, The Last Supper, Crucifixion, and Resurrection, Jonah and the Whale, and Joseph and the Coat of Many Colors.

Life with Jesus — This story begins with one special child who was born in Bethlehem and raised in Nazareth: Jesus, the son of God. As He grows to become the Prince of Peace, spreading the message of God’s love in the world, He and His apostles preach to millions of people far and wide the lessons of love and forgiveness. Follow Jesus across the desert sands of Egypt as He teaches children of all ages the values of Christianity. Features a simple narrative which reaches out to its young audiences and conveys the triumph of good over evil.

The Miracles of Jesus — The Bible is filled with stories of God's miracles. But the miracles performed by Jesus have a special significance: they reveal His divinity and suggest that those who come to God through Christ will themselves be miraculously transformed. now, with this beautifully animated film, you and your family can revel in the wonder of these miracles.

The Apostles — After the death and resurrection of Jesus, His followers dedicated themselves to spreading His message throughout the land. Now you can share this uplifting story with your entire family. The Apostles begins with a miracle. Peter, having be filled with the power of the Holy Spirit, heals a man who has been crippled since birth. The crowd that witnesses the miracle is amazed. But Peter reminds them that he performed this wondrous act for one reason only—to glorify Jesus’ name.

The Last Supper, Crucifixion, and Resurrection — Knowing that His last days on earth are numbered, Jesus gathers His disciples together for The Last Supper, reassuring them that He will be with them in spirit. Jesus retires to a garden to pray, but is captured by soldiers before dawn, having been betrayed by Judas, one of His disciples. Within a short time He is crucified. On the third day after His Crucifixion, He is resurrected, eventually fulfilling His destiny by ascending to Heaven.

Jonah and the Whale — The forces of the Assyrian Empire have been terrorizing Jonah and his people and Jonah quickly grows to hate them. He vows that he will one day take his revenge. But years later, God asks Jonah to go and preach to the Assyrians. If Jonah convinces them to renounce their sinful ways, God will forgive them. Jonah wants them to suffer and feel the Lord's wrath, and so he foolishly tries to run away. When God catches up with him, Jonah learns a series of important lessons about the power of God's wrath, and the power of His love for all mankind.

Joseph and the Coat of Many Colors — Joseph is among the greatest of Old Testament heroes. But unlike other biblical heroes, Joseph is not a warrior. His heroism is demonstrated through simple expressions of courage and faith in God. 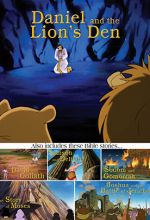 This animated 6-movie pack includes Daniel and the Lion's Den, David and Goliath, Samson and Delilah, Sodom and Gomorrah, The Story of Moses, and Joshua and the Battle of Jericho.