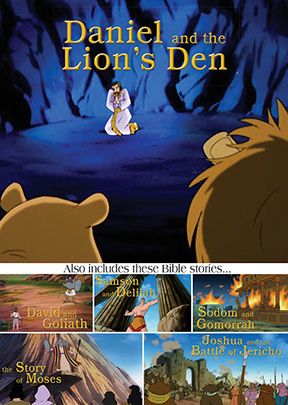 This animated 6-movie pack includes Daniel and the Lion's Den, David and Goliath, Samson and Delilah, Sodom and Gomorrah, The Story of Moses, and Joshua and the Battle of Jericho.

Daniel and the Lion's Den — The Babylonian army has just invaded Jerusalem. Soldiers have been instructed to round up several boys who can serve in the king's court, including Daniel. Daniel refuses to eat the food he is served because he would violate Jewish law. When Daniel reveals that he has a gift for interpreting dreams, he gains the king's favor and is elevated to a position of power.

David and Goliath — David is a shepherd boy with an uncommon amount of courage. No one imagines that he will someday become king of Israel—no one, that is, except God. David must prove himself by single-handedly defeating Goliath—a giant who has been terrorizing God's chosen people.

Samson and Delilah — Samson is destined for greatness. As he grows, he proves to be the strongest man in the land. .But when he falls in love with a deceptive woman named Delilah, his fortunes change.

Sodom and Gomorrah — God sends Abraham on a journey with his wife, Sarah, and they experience many difficulties. They witness the destruction of Sodom and Gomorrah and, in the process, learn an important lesson about God's wrath.

The Story of Moses — The Israelites—God's chosen people—have been enslaved by the ruler of Egypt. But finally God decides that He will put an end to their oppression. He calls on Moses to lead His people to freedom.

Joshua and the Battle of Jericho — The Israelites—under the leadership of Moses—have been wandering in the wilderness for forty years. Now they are about to enter the Promised Land. But Moses's time has come to join God in Heaven and Joshua is appointed to take his place. Like Moses, Joshua realizes that nothing can be accomplished without God's help. The Lord rewards Joshua for his faith by revealing a plan that will allow the Israelites to take the city of Jericho.