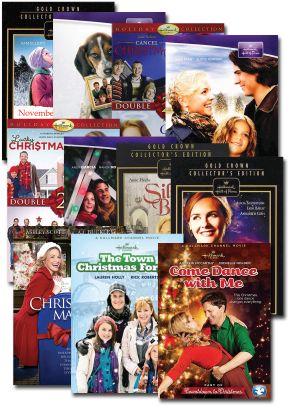 This set includes 11 favorite Christmas DVDs from Hallmark -- 13 movies in all!

November Christmas — A brave young girl is battling cancer, which has an effect on the people around her. Starring John Corbett and Sam Elliot.

Cancel Christmas — Imagine Santa's surprise when the Christmas Board of Directors issues an ultimatum: In 30 days or less, make Christmas less commercial and material, or lose it forever.

Christmas Magic — Carrie Bishop lives for her successful career as an event planner in New York City, but her life changes in an instant after a car accident in a snowstorm.

One Christmas Eve — Anne Heche stars as a recently divorced mom who wants her two kids’ first Christmas without dad to be perfect. An entertaining but unfortunate series of Christmas Eve mishaps ensures that won’t happen—unless perfect means the family has its most memorable and heartwarming Christmas ever.

Christmas with Holly — Maggie Conway has HAD it with big-city living, especially after being left at the altar. She moves to the small town of Friday Harbor in Washington State, finally realizing her dream of opening a toy store, and meets Mark Nagle, the proprietor of the local coffee shop. It's not quite love at first sight, but almost! Mark's number one priority, though, is his six-year-old niece, Holly, whose single mom has recently passed away and left him as her guardian. As you can guess, these complicated lives intertwine.

Trading Christmas — Emily Springer is disappointed her daughter Heather won't make the cross-country trip to visit at Christmas. Emily decides to surprise Heather and trades houses with Charles Brewster. Emily is the one who is surprised when she finds out her daughter left for Florida with her boyfriend and has only Charles' brother for company. In this holiday tale about twists of fate, Emily and Charles find love at the most unexpected time.

Lucky Christmas — Holly Ceroni, a single mom trying to get back on her feet, is crushed when she learns her winning lottery ticket is in the glove compartment of her recently stolen car. Mike Ronowski, the construction worker behind Holly's missing property, goes along with a plan to befriend Holly and coerce her into giving him half her winnings, until Mike unexpectedly falls for Holly.

Christmas in Conway — To surprise his ailing wife for Christmas, Duncan Mayor wants to put a ferris wheel in their backyard until his nosy neighbor intervenes to try to stop him. Starring Andy Garcia, Mandy Moore, and Mary Louise Parker.

Silver Bells — Anne Heche and Tate Donovan star in an adaptation of Luanne Rice's holiday tale about a widower who finds love in New York City.

Candles on Bay Street — A single mom returns to her hometown after a lengthy absence, posing a potential threat to the marriage of her old high school flame and his wife.

Christmas Mail — Sparks fly during the holidays when Postman Matt (A.J. Buckley) meets mysterious new co-worker Kristi (Ashley Scott). As an official "Santa Writer," Kristi is buried in children's letters to Santa. Their petty boss is suspicious of this new employee and enlists a reluctant Matt to spy on her. The more Matt gets to know Kristi, the more he falls for her. Even before he knows she is Santa's daughter.

The Town Christmas Forgot — An urban family that can't seem to get along gets stranded in a remote, impoverished lumber town two days before Christmas. When they become involved in the town's home-grown Christmas pageant, they not only help solve the town's problems but learn to connect with each other just in time for the holidays.

Come Dance with Me — Trying to create the perfect proposal for his boss's daughter, Jack signs up for dance lessons before the lavish annual Christmas Dance. But when sparks start to fly between Jack and his dance instructor, Christine, Jack will have to make some important decisions before it is too late.