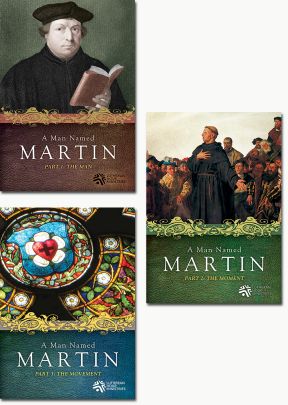 Set includes all three parts of the documentary series, A Man Named Martin.

A Man Named Martin, Part 1 — The life of Martin Luther is one of resolute conviction and steadfast faith. His contributions to the reform of the medieval Church are unparalleled.  He courageously stood against unbiblical teaching and sounded the clarion call of salvation by grace through faith. With iron willed resolve he refused to back down in the face of public abuse and threats on his life. This documentary will examine the life and teaching of this great reformer. The program gives important historical background and explains the key doctrines expounded by Luther: With tenacity and bravery, Martin Luther inspired a Reformation that reverberates throughout the centuries. Also includes a five part Bible study version. Widescreen.

A Man Named Martin—Part 2: The Moment — Witness the interplay of personalities and events that led to the Protestant Reformation. From Luther’s inner struggles of conscience and faith to his call for debate with the Pope to his scathing rebuke of erroneous church practice, this installment examines the semi-scriptural and oft-times unethical teachings and doctrines of the late Medieval Church and how Luther addressed them. From purgatory, penance, and indulgences to the treasury of merits of Christ, Masses for the dead, and the institution of the Papacy, Luther—and other like-minded reformers—had a misinformation overload on their hands. A cast of scholars and professional church workers share their expertise on the cultural and religious milieu in which Luther operated. A discussion guide, complete with numerous Internet links and helpful questions, assists viewers toward a deeper understanding of this critical period in the life of Christ’s church on earth. A supplementary text, The Reformation Twelve, gives viewers a look at the prominent figures who shared the religious stage in early 16th-century Europe. DVD includes both the 65-minute television version and a three-part Bible study version with PDF guides and optional English subtitles.

A Man Named Martin – Part 3: The Movement completes the trilogy begun with Parts 1 and 2, The Man and The Moment. Here viewers will see how God was at work in the Reformation, in the lives of the men and women that shaped it, and in the societal transformations that resulted. Everything from education and government to marriage and vocation came under the influence of the Reformation. Here was a world in tumultuous flux: widespread cultural and religious tensions, heated theological controversies, bloody conflicts across the map—all marked a continent in turmoil. Beginning with Luther’s nailing of his 95 Theses to the church door at Wittenberg in 1517 to the Peace of Westphalia, a treaty that capped the Thirty Years’ War in 1648, the Reformation launched by Luther produced enormous changes in Europe—changes that eventually swept across the Atlantic, influencing our nation as well. DVD includes both the 74-minute version and a five-part Bible study version with PDF guide and optional English subtitles. 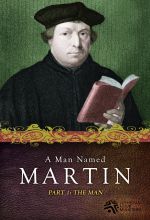 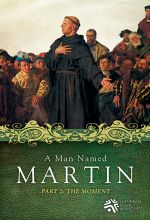 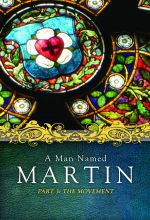