Victor and The Cross & the Switchblade - set of two 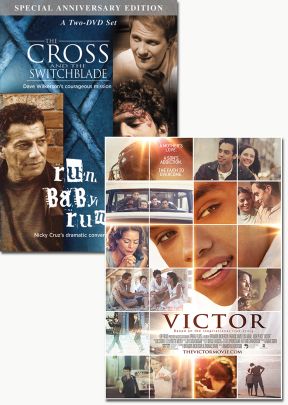 Includes Victor and The Cross and the Switchblade/Run Baby Run Special Edition.

Victor — Based on a true story. In the early 1960s, Victor Torres and his family moved to Brooklyn, New York from their native Puerto Rico in search of a new life. The American dream quickly fades as they face a life of want in their adopted home. As a new recruit in a street gang, a teenage Victor embarks on a lucrative new drug-trafficking business in an attempt to help his struggling family. Victor is quickly enslaved by drug use, and his parents, Manuel and Lila, desperately search to find a way to help their son. A faith-based rehabilitation program is their last chance to rescue Victor.

The Cross and the Switchblade / Run Baby Run Special Edition
This special anniversary release of the ever popular film tells the true story of the beginning of David Wilkerson's work among the gangs of New York City and the dramatic conversion of the notorious street fighter, Nicky Cruz.

Now in over 25 languages, The Cross and the Switchblade, starring Pat Boone and Eric Estrada, is one of those rare films that has shown its unique power to connect with the deepest hopes and fears of youth around the world. It remains today one of the most compelling stories of love, grace and the truth that no one is ever so far gone that they cannot find the way out. Fullscreen.

Run Baby Run
Share the miracle of a transformed life--a life changed from bondage to drugs, violence and crime to a life serving Jesus Christ! This historic video presents the touching, true story of Nicky Cruz's life. You will marvel at the human drama of Nicky's story and witness how God gave him the call to take the message of Jesus Christ to teen gangs throughout America and the world. Fullscreen.