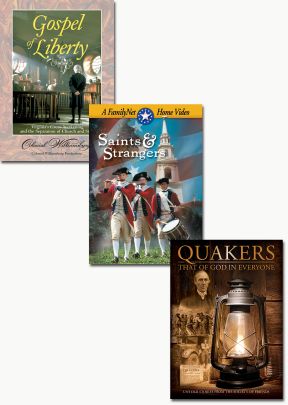 Set includes Quakers: That of God in Everyone, Saints and Strangers, and Gospel of Liberty.

Quakers: That of God in Everyone — Though many are familiar with the Quaker names such as William Penn, Susan B. Anthony, Daniel Boone and Johns Hopkins, lesser-known Quakers also impacted society in significant ways. These are untold stories Friends who profoundly influenced the course of American history by seeing that of God in everyone.

Saints and Strangers — Saints and Strangers addresses religious influences from the time of the Mayflower to the Great Awakening, from Plymouth Rock to the War of Independence. It examines the groups of the faithful who were crucial influences during the colonial period — the Church of England, the Puritans, Baptist, Quakers, and others.

Gospel of Liberty — Produced by Colonial Williamsburg, the program recreates for students of American independence the fire of George Whitefield, the zeal of the Reverend Samuel Davies, and their pursuit of the right to worship according to one's convictions. With Colonial Williamsburg as a backdrop, Thomas Jefferson guides viewers to understand how the axiom that government ought not legislate belief became a fundamental pillar of American democracy. 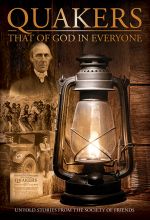 Quakers - That of God in Everyone 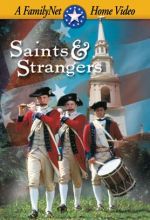 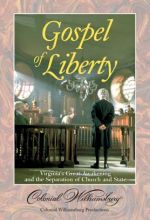