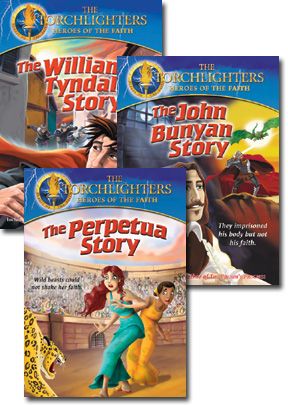 Torchlighters is a series of animated programs for youth ages 8-12, presenting the lives of true-life heroes from Christian history. When kids see what God can do through a "Torchlighter" who is devoted to carrying out His will and purposes, they too may want to carry a torch of faith by serving Him. For more information on the series, visit www.torchlighters.org.

The William Tyndale Story -- William Tyndale tops King Henry VIII's "Most Wanted" list in 1535 and is being pursued across Europe by the king's bounty hunters. What is his crime? Murder? Theft? No, none of these. William Tyndale's "crime" is translating the Bible into English for the common people. Is he willing to risk his life for this cause? This episode of The Torchlighters follows William Tyndale's adventures as he works in secret, moving from town to town as a fugitive to avoid capture. Friends and allies help him along, but enemies may be lurking around any corner. Come along and see whether this Torchlighter completes his task before the king's men close in on him.

The John Bunyan Story -- John Bunyan spends his days in prison, separated from his wife and children. Living in the cold, stone cell is the price he pays for going against the established state religion. If only he would agree to stop preaching, John could walk out a free man! Why does he choose to stay in jail, and how will he serve his Lord in this wretched place? Find out in this episode of The Torchlighters.

The Perpetua Story -- It is the year AD 203 in Carthage, North Africa. Perpetua, an affluent young mother, is charged with converting to Christianity and is sent to prison. But her freedom can be secured easily. All she has to do is offer one pinch of incense in honor to the Roman gods. With this simple act of devotion and loyalty to the Roman Empire she can regain her freedom and return to her infant son and a life of comfort. As her father pleads for Perpetua to consider the welfare of her child and the reputation of their family, she slowly makes her way to face the Roman proconsul and declare her final decision. What will it be? This episode of Torchlighters: Heroes of the Faith presents one of the most influential, true stories of the Early Church. 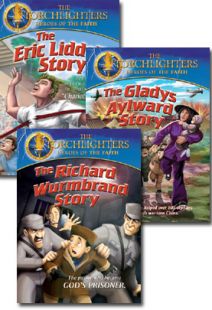