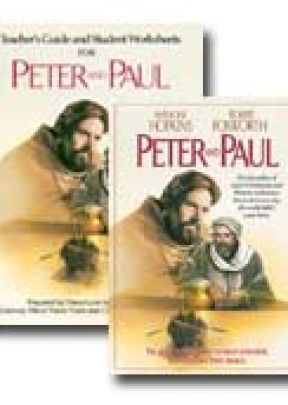 Anthony Hopkins stars in this epic network television mini-series brings to life the precarious existence of early Christianity. The new movement is beset by violent opposition from without and constant turmoil from within. Two key leaders emerge -- Peter and Paul -- who struggle to keep the faith alive. This dramatic presentation follows the pair, together and separately, through three epochal decades. Included are the stoning of Stephen, the road to Damascus, their encounter in Jerusalem, their conflicts over how the word of Christ should be spread. Paul’s travels to Asia Minor and Greece, Peter and Paul’s clashes over Jewish law, and Peter’s decision to follow in Paul’s courageous footsteps. The drama concludes in Rome in approximately A.D. 64 with the beheading of Paul and the crucifixion of Peter under Emperor Nero.

David Day was a prolific TV director, but his most enduring contribution is this 1981 dramatization based on Acts and the Letters of Peter and Paul. Winning two Emmys, it boasted a screen full of stars, with Anthony Hopkins as the apostle Paul. What a contrast to his later role as Hannibal Lector! Robert Foxworth played Peter, and other cast members include John Rhys-Davies, as Paul's companion Silas; Herbert Lom as Barnabas; Raymond Burr as King Herod Agrippa I; Oscar winner Jose Ferrer as Gamaliel; Jean Peters as Priscilla; Julian Fellowes (yes, the one of Downton Abbey fame!) as the Emperor Nero; and Eddie Albert as Procurator Festus.

Scriptwriter Christopher Knopf combines speculative material (much of it dealing with face to face encounters between Peter and Paul) with extensive episodes from the Book of Acts. These include the stoning of Stephen; Christ calling Saul on the road to Damascus, Peter and Paul's encounter in Jerusalem; their conflicts over whether or not Gentile converts had to be circumcised (with Paul later unaware that Peter had come over to his side); Paul and Barnabas's travels to Asia Minor and Greece; Paul's clashes with the Judaizer Christians; Paul's arrest and journey to Rome where he is well received by the city's Christians; Peter's decision to follow in Paul's footsteps to Rome; and their martyrdom in approximately A.D. 64. Curiously left out is Peter's Pentecost preaching in Jerusalem and his vision that led him to see that even Romans could be a part of the church. Thus those who want a close following of the events described in the Book of Acts will be a little disappointed by the omissions, as well as the depiction of the Jerusalem leaders as failing to preach and spread the Gospel, thus requiring Paul to revitalize and spread the faith. Indeed far more screen time and credit are given to Paul than to Peter.

Overall, however, the above is a minor complaint, this being a very moving depiction of the two leaders who shaped the early church so much. The two lead actors give powerful performances, and it was interesting to see how much of their dialogue was taken from their writings. In Corinth Paul, aware that he has been lacking in love (especially toward young Mark), sits at a table writing about love, presumably this essay later becoming a part of 1 Corinthians 13. In Rome Peter preaches in various settings to revive the believers, dispirited by the beheading of their beloved Paul, his words coming from his First Letter in which he sought to empower those being persecuted. Then, when the Big Fisherman is crucified upside down, he hears Paul's voice declaring the marvelous assertion from the end of Romans 8 that nothing can separate us from the love of God in Jesus Christ.

For those turned off by all the violent shenanigans of Pilate in the on-going A.D.: The Bible Continues, this almost forgotten classic provides a welcome alternative (or addition—despite my reservations I am still watching the current NBC series). We owe a round of applause to Vision Video for making this available. 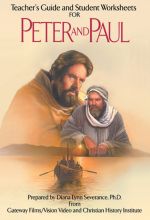