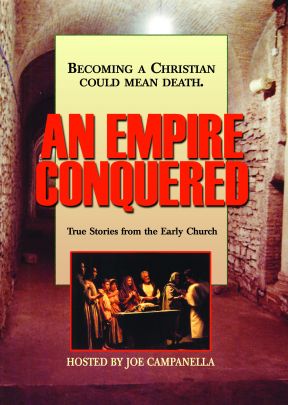 This moving investigation looks at five heroic martyrs—Augustus, Clement, Cecilia, Apollonius, and Agnes—who lived during years when Christians were cruelly persecuted and martyred.

This moving investigation, filmed on location in Rome, looks at five heroic martyrs—Augustus, Clement, Cecilia, Apollonius, and Agnes—who lived in Rome during the turbulent years when Christians were cruelly persecuted and martyred for their beliefs.

Joseph Campanella hosts this TV-style documentary that investigates the early days of the Christian church. The producer address three central questions: "Why did Rome so cruelly persecute the early Christians?"; "How did the church survive at all when the cost of conversion could be death?"; and "Who were these early Christians who, in spite of incredible pressures, remained steadfast in their beliefs?" Shot entirely on location in Italy, this video explores the lives of several early martyrs, in the context of various waves of Roman persecution in the second, third, and fourth centuries. Having been produced for a general audience, the analysis is more broad than deep; more historical than spiritual.

An Empire Conquered examines the glorious martyrdom of five early Christians to illustrate how the ancient church changed from being a religious pariah to the official religion of the Roman Empire. Labeled a docudrama, this video combines the best of several genres: documentary, travelogue, and drama. Campanella takes viewers to the actual spots where martyrs such as saints Cecilia and Agnes met their fates. The folks at Vision Video continue their tradition of excellence with this fine introduction to church history. Certainly An Empire Conquered will be a welcome addition to any church or personal library.

Excellent! Fantastic! Must see. Should be a classic. Apparently well researched and documented. Many quotes and historical references that could be checked and confirmed.