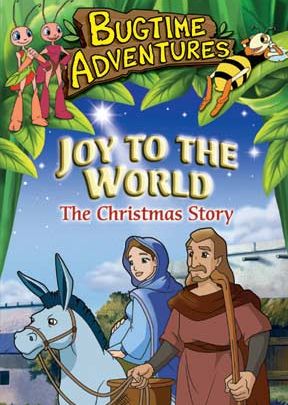 Meanwhile, the bugs need to relocate their town of Bugglesville due to a fire. They ride along with Mary and Joseph to search for a new place but find the stable already occupied. They continue their search and eventually wind up back at the stable where they discover the significance of the new baby.

Children ages 4-9 will enjoy these entertaining stories as they learn about hope.

Well, this is different!

Bugtime Adventures is a series of animated movies that share traditional Bible stories, but they share the stories with a twist...a buggy twist...bouncing back and forth between the Bible story and that of a village of bugs. Intrigued? So was I.

I hardly know where to start sharing about Bugtime Adventures Joy to the World. It does take slight creative license with the story of Mary, Joseph, and the birth of Jesus, but that is hardly unexpected as most such movies seem to do this very thing. Overall, it is true to the biblical account; I particularly appreciate the fact that only the shepherds show up at the stable; there are no much-too-early wise men in sight.

And then there are the bugs. In the beginning of the movie, they are living in a hole in the ground in Mary's home, but this location soon becomes too dangerous and they decide they must move their village. The bugs' story concerns the search for a new location and eventually it takes our buggy heroes to...ta dah...a certain stable in Bethlehem. They learn much along the way, of course, and in a surprise ending a group of angry horse flies that had at first threatened them seems almost to become their friends thanks to the arrival of a certain baby.

All animated films have music and this one is no exception. The music linked to the humans (or giants, as the bugs think of them) is fairly traditional, while the bugs' music is much more...funky? There is even one bug who loves to both scat and sing the blues. I had to grin when, at the end of the movie, he led all the bugs in singing "Silent Night".

If this review seems a bit hodge-podgy, please forgive me. This is one of those videos that is hard to pin down. But I did enjoy it; never think I didn't. I also appreciated the extra video, "The Making of Bugtime Adventures." It does a fabulous job of introducing the viewer to what goes into creating cell animated movies and would definitely be an educational addition to your homeschool.

Thumbs up. - Reviewed by: Rena Arlen

Targeted toward children ages 4-9, the animated Joy to the World - The Christmas Story, narrated by erstwhile Bibleman Willie Aames, incorporates the Nativity story into a kid-friendly tale that kicks off when Bugglesville - a colony of bugs living in Mary's house - is ruined by a tiny smoldering spark from the fireplace. Insects reps Antoni, Megan, Iggy, and Prissy are appointed to hitch a ride on Mary and Joseph's donkey in order to scout a new location for Bugglesville. After encountering a group of hostile horseflies claiming turf near the infamous stable, the quartet climbs onto a sheep, which leads them to two shepherds who are visited by the angel Gabriel. Clinging to the shepherd's robes, the bugs end up back at the manger, where-after seeing the heavenly new baby - they decide to rebuild their town right there, figuring that if it's good enough for God, it's good enough for Bugglesville, DVD extras include a "making -of" featurette. Recommended.