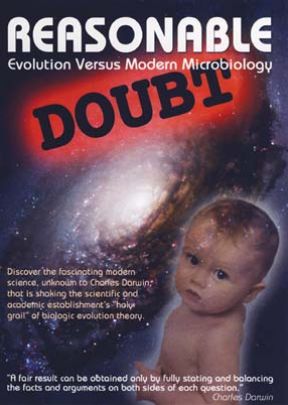 Discover the fascinating modern science, unknown to Charles Darwin, that is shaking the scientific and academic establishment's "holy grail" of biologic evolution theory.

As scientific knowledge grows exponentially, Darwin's theory of evolution becomes more debatable and hotly contested by researchers on both sides of the growing scientific controversy.

Reasonable Doubt presents a logical rendition of some of the fundamental problems evolution theory faces in the light of modern scientific knowledge with easy-to-understand explanation, animations, interviews and logical illustrations. This thought-compelling and no-punches-pulled DVD illustrates dissenting scientific issues in the fields of microbiology, physics, cosmology, and statistical probability.

Every intellectually honest student of life needs to watch this DVD! This is not a Creation or Intelligent Design presentation and it does not argue for any particular alternative theory to evolution -- just the cold, hard facts regarding the scientific shortcomings of evolution -- but some different theory is clearly called for in light of modern science as illustrated in Reasonable Doubt: Evolution Versus Modern Microbiology.

Reasonable Doubt provides sound, authoritative discussion of the relevant science and logic in a fascinating way that viewers can understand and appreciate. Recommended for ages 14 and up.

Reasonable Doubt pits evolution versus modern microbiology. The cover says, “Discover the fascinating modern science, unknown to Charles Darwin, that is shaking the scientific and academic establishment’s ‘holy grail’ of biologic evolution theory.” Using video clips and plenty of computer-generated graphics, a narrator explains how Darwin’s theory of evolution has been largely disproven by subsequent scientific discoveries. “As scientific knowledge grows exponentially, Darwin’s theory of evolution becomes more debatable and hotly contested by researchers on both sides of the growing scientific controversy.” I’ll admit to being unable to validate the facts presented here, as they are far above my rudimentary knowledge of science. The quality of this presentation is solid enough, though perhaps slightly amateurish, and the narrator has a voice that threatens to lull the viewer to sleep. http://www.challies.com/music-movies/dvd-reviews