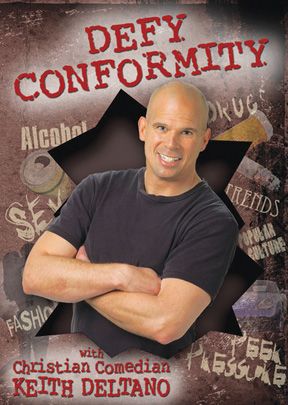 Christian comedian takes on popular culture. Keith uses edgy, interactive comedy to satirize the commercialization of sex, peer pressure, designer labels, SUV's, the macho myth, smoking, drinking and a whole host of conformist behavior. Keith uses comedy to go where others fear to tread! His intimate knowledge of youth culture and years of experience working with families allow him to have a positive impact on the most jaded teen or cynical adult. Keith's show is hilarious and engaging. It is comedy with a message!

-Are you tired of your teen doing what everybody else does? Keith's show will fix that.
-For 13 years and above - not for the faint of heart.
-Includes conversation starters (short clips) and questions!
-Stand-up comedy has never been more relevant!

Engaging comedy, along with a powerful message, make this DVD a good choice for your library. Targeting teens and parents, Deltano challenges his audience to break away from society's standard and embrace a radical way of living. He discusses such subjects as peer pressure, appearances, sex, love and alcohol,all the while doing it in a fun and safe manner. Through his knowledge of teen language, thinking, and modern culture, he brings a fresh perspective that is straightforward and easy to relate to. He also uses Scripture to back up his arguments every step of the way.

Deltano's contagious energy will keep parents and teens anticipating what he will do next. This is an aspiring DVD the family will enjoy watching together, as well as benefit from to enhance relationships. Highly recommended for any adult and/or parent and it worthy of a church library.

With a brash, in-your-face style, Christian comedian Keith Deltano entertains and engages an audience of young people with a routine that targets conformist behavior throughout society (not just among teens) while--sparingly--also holding it up against teachings from the Bible. Deltano, a former public school teacher, questions the value of designer labels (Deltano says that if you see his tots in Baby Gap apparel, it belonged to another kid first), and asks why men buy SUVs (which he calls "stupid useless vehicles") when their wheels never leave the pavement. More to the point for adolescents, Deltano also takes on the subject of sex in a refreshingly open fashion, talking about media messages concerning body image, and the differences between love and sex. The underlying biblical message here reminds teens that while social pressures force many to focus on external appearance, God sees the heart. Watching this as a family (including two teenagers), we found ourselves frequently pausing to discuss issues--with the comic approach opening up avenues of conversation that a traditional guidance program would not.