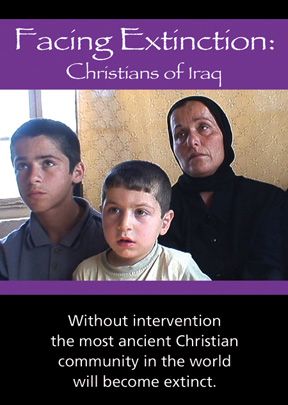 Facing Extinction is a call to action for Western Christians to come to the aid of the Christians of Iraq. It gives specific advice on how individuals can lobby the U.S. government to change the current policy and work to end this humanitarian crisis before it is too late.

Facing Extinction: Christians of Iraq is a heart-wrenching documentary about the current plight of the Christian Minority in Muslim Iraq. This stark and forceful film holds nothing back as it gives voice to just a few of the thousands who are facing persecution at the hands of Islamist extremists. The persecution takes the form of kidnapping, rape, church bombings, barbaric torture and murder. The film estimates that one million Iraqi Christians have been forced from their homes in recent years, some fleeing to the north of Iraq and others taking refuge in nearby countries where they are often unwelcome and forced to live under deplorable conditions. The film also documents the indifference of the Iraqi government to the situation as well as the U.S. government’s refusal to offer refuge to these suffering Christians due to the current interpretation of the U.S. Patriot Act.

Facing Extinction is a call to action for Western Christians to come to the aid of their brothers and sisters. It gives specific advice on how individuals can lobby the U.S. government to change the current policy and work to end this humanitarian crisis before it is too late.

Narrated by Jim Caviezel of The Passion of the Christ.

As reported in this documentary narrated by actor Jim Caviezel (The Passion of the Christ), more than a million Iraqi Christians have been forced from their homes by Muslim extremists, with churches bombed and believers and religious leaders kidnapped, tortured, raped, and murdered. Told largely through eyewitness accounts from victims and their families, the stories related here are brutal; Middle East policy expert Dr. Eden Naby says the level of violence, which she describes as "barbaric," makes the situation unique (many of the incidents also involve extortion). Refugees have been fleeing to Jordan, Syria, and Turkey, but in doing so they become illegal aliens; work is difficult or impossible to secure, and their children aren't allowed to go to school. Iraqi and American officials don't acknowledge the refugee problem, and provisions of the U.S. Patriot Act (which is violated when a family member pays ransom to a terrorist organization for a loved one's life) prevent many from immigrating to the United States. With Iraqi Christians tracing their heritage back more than 2,000 years (the last remaining speakers of Aramaic—the language spoken by Jesus Christ), their plight is dire, and the documentary concludes with a call to action, asking for letters of "outcry" to be sent to President Obama. DVD extras include audio commentary by filmmaker Robert Marcarelli. Highly recommended.

The stories in this film are hard to hear, but need to be told in order to help save lives. When the Iraqi government was removed in 2003, many began attacking the Christian community there. Christians have been kidnapped, tortured, raped, and murdered. Having helped Coalition forces during the war, these people have had to flee in order to survive. Over a million Christians have had to abandon their homes in Iraq. Many churches have been bombed while priests and nuns there have been murdered.

This video interviews Iraqi people, staff of the United Nations, members of the U.S. Congress of both parties who are trying to help, humanitarian workers, Iraqi and American clergy, and a former minister who has worked to save lives of the refugees.

These people need help. Not being Muslim or Kurds, they have been targeted by terrorists. If they gave even a dollar to a kidnapper in an attempt to save a family member, they are not able to immigrate to America because of laws included in the Patriot Act. Many have paid thousands, and while some received their family members back alive, others were killed even though the payments were made. Two and a half million Christians have fled to northern Iraq and the Nineveh plain as internally displaced citizens. Hundreds of thousands have made it to Jordan, Syria, and Turkey. While waiting to move on to Europe or America, these refugees are not welcomed. This has been called the greatest refuge crisis of the past 60 years.

The pain and grief of the families are shared amidst footage of youth singing in their church choirs. The film's director shows the attempts to change the laws so that lives might be saved as well as relief efforts by western Christians bringing food to those living in the refuge camps. In the bonus features, he tells of the challenges in making the film and how Iraqis risked their lives to help him access dangerous areas to tell this story. Purchase of the DVD benefits increasing relief efforts, and we are charged to petition our leaders to help save our brothers and sisters in Christ.

The video is narrated by Jim Caveziel of The Thin Red Line, The Passion of the Christ, and Person of Interest fame. A quote by Edmund Burke stands out along with the stories of the Iraqis: "The only thing necessary for the triumph of evil is for good men to do nothing."