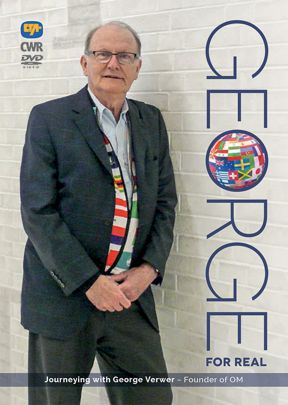 Founder and leader of one of the world’s largest missionary movements, Operation Mobilization, George Verwer takes you on his travels all over the world, driven by a passion to see men and women come to faith. Discover how George Verwer’s hunger for God was ignited during his turbulent teenage years and how God led him to ignite a dynamic global missionary movement.

George is a fly-on-the-wall documentary capturing the energy, enthusiasm, vision and humanity of one man’s life and mission. Founder and leader of one of the world’s largest missionary movements, Operation Mobilization, George Verwer takes you on his travels all over the world, driven by a passion to see men and women come to faith. Discover how George Verwer’s hunger for God was ignited during his turbulent teenage years and how God led him to ignite a dynamic global missionary movement. Although Verwer has experienced personal failure and heartbreaking discouragement God continues to use him to boldly advance the cause of Christ around the world. His story inspires, challenges and encourages those who wonder if God can ever use them for His glory. Widescreen.

In the introduction to this DVD the voiceover says that this is 'not a film about Operation Mobilisation (OM) but a film about George Verver'. However, you can't separate the two; they are inextricably linked.

The documentary sees George visiting some of the places across the globe which have been significant to him—and as a result to many others too. He visits his schools; the theatre where he encountered Jesus at a Billy Graham meeting; Moody Bible Institute in Chicago, Mexico—the beginning of the Send the Light bookselling ministry; Mexico City where he started his married life living in the back of the bookshop which is still there today.

The story moves to Spain, France, Russia, and then the place which still draws him—India. Working with the Dalits and then the Hindus in Nepal. From there we speed to Bolton, to Sweetens bookshop which was the first home of OM. Then it's story of the four Logos ships, with Logos Hope still ministering to people today. By now the work of OM is truly global but his vision remains to see the gospel delivered to those who haven't heard it.

George visits Ground Zero in New York, his home city where he recalls just getting alongside people in the aftermath of 9-11. We see him on air in Chicago, there are pictures of him preaching to hundreds as a young man. His passion for all to receive the gospel is inescapable in this film. He's a great communicator, encourager, facilitator, and a leader of others. By his own admission he's not perfect, he has his faults, but his drive and passion to fulfill what he sees as his mission is unfailing. Crawford Telfer had directed an insightful and remarkable film of a man who's probably best known by many as the evangelist wearing the "Globe" bomber jacket, which appears regularly in the film. But this film reveals a fuller picture; George—for real! Watch and marvel at what God has been able to achieve through one man.

The founder and guiding light since the 1950s of a global Christian ministry called Operation Mobilization is given loving tribute in this documentary. George Verwer, who was inspired to devote his life to God after seeing Billy Graham at Madison Square Garden in 1955, is an outspoken proponent of radical discipleship (in which Christians try to live and act as Jesus did—including rejecting materialism and "turning the other cheek"). Today, he continues to be an inspiration to some and a figure of controversy to others with his uncompromising views on the Christian faith. Operation Mobilization sprang from Verwer's convictions that every person should hear the Gospel at least once, and it started with Verwer's trip from his native New Jersey with friends and a vanload of literature to spread the Gospel in Mexico. Currently, the organization numbers nearly 7,000 and has a global reach. Although in recent years Verwer has passed leadership duties on to others, he remains actively involved in the direct ministry efforts. Now a senior, the clear-speaking and passionate Verwer continues to be an inspiration to others.