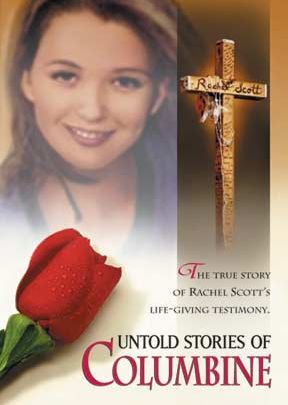 Here is an amazing story of hope from the horrific massacre at Columbine High School on April 20, 1999, where many innocent lives were lost. One of those was Rachel Joy Scott, mercilessly murdered for her faith in God. Now her death, her story and the courage behind it are reaching around the world, offering young people a new view of life. Darrell Scott, Rachel's father, shares how the tragedy has sparked many young people to take a stand for their faith in Christ. He reveals the amazing contents of his daughter’s diaries and her apparent premonitions of what was to come.

Also included on this video are excerpts from Rachel's funeral service, as seen on CNN worldwide. This amazing story of tragedy and God's mercy is a powerful and shining testimony for Jesus Christ. Young people will be encouraged and challenged by Rachel's story to share Christ more freely and take a stand for their convictions. Fullscreen.

There are a few events or occasions in every generation where time seems to stop. Those old enough to remember J.F.K’s assassination tend to not only remember the news reports, but remember where they were and who they were with when they heard about his death. Many people still remember how they felt when they heard that the space shuttle Challenger was destroyed just seconds after lift-off, or more recently, when they began to hear news reports about planes plowing into the World Trade Center in New York City. Another tragedy that stopped a nation, and really an entire continent, was the shootings in Columbine High School on April 20, 1999.

As with all tragedies, there arose out of Columbine stories of untold grief along with stories of great hope and rejoicing. Untold Stories on Columbine places the spotlight on just one of the young people who lost her life that day. Rachel Joy Scott was only seventeen years old but had placed her faith in God and sought to be a light in the darkness of the halls at her high school. From all accounts she was a fun, happy and vivacious young woman who was bold in sharing her faith. The DVD is a video recording of a speech her father, Darrell Scott, gave at a Baptist church in Tennessee. It also contains footage from Rachel’s funeral which was broadcast worldwide on CNN.

Apparently only a couple of weeks before the shootings Rachel, true to her convictions, had witnessed to the two gunmen. Her father recounts what has become a popular but unsubstantiated account of the events surrounding her death. Rachel had already been shot twice while standing outside the school building. One of the gunmen, seeing that she was wounded, grabbed her hair and pulled her head towards him, asking “Do you still believe in God?” When she replied, “You know I do,” he immediately shot her through the temple. This same affirmation of faith was attributed to Cassie Bernall (and was later disproven, despite books and songs in her honor) and to Valeen Schnurr who survived. It is entirely possible that the gunmen asked this question of multiple people. We will never know with any certainty whether Rachel’s final words were a statement of her faith, but what we do know is that she was a remarkable young woman who left a legacy that has since inspired thousands or even tens of thousands of young people.

The untold stories of Columbine are not the stories of Rachel or Cassie, but of those who were stirred to follow their example in finding meaning and refuge in Christ. While many stories that arose in the aftermath of that day have long since been proven false, what no one can disprove or take away is the faith of those young women and many of the other students. We cannot know how many lives were touched and how many hearts stirred to hear of young believers who lost their lives - maybe as martyrs and maybe not - leaving behind a legacy of faith.

Darrell Scott is a natural speaker and his presentation is powerful and stirring. He shares stories from his daughter’s past and relates many of her premonitions that her life was not going to last long. Equally powerful are the testimonies of Rachel’s friends and family as they pour out their hearts at her funeral. The grief, still so new and fresh, is palpable. I had two concerns with the presentation. First, it seemed that he must have already given the speech hundreds of times, for it seemed to be done with little spark or emotion. Secondly, discerning viewers may find themselves squirming at times, as Scott is a Pentecostal and holds back nothing, even in front of his Baptist audience. Knowing his audience he attempts to explain his beliefs on visions, dreams and direct revelation from God, but in the end I agree with a friend he mentions in his speech who always encourages him to “show me in the Word!”

This is an interesting DVD and well worth the 80-minute investment. Whether or not Rachel Scott died with a confession of her faith upon her lips, we know from her life and from the legacy she left behind that she believed deeply in the Lord and was called home from that bloodstained field to her Savior’s side. Her life and death were both a powerful testimony to the grace of God. http://www.challies.com/music-movies/dvd-review-untold-stories-of-columbine

More than a 5 star movie. This is a must for everyone to see. Spread God's love,show or tell everyone you know this video--should not collect dust. God bless. 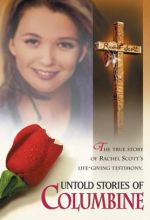