History Of Christianity - With PDFs 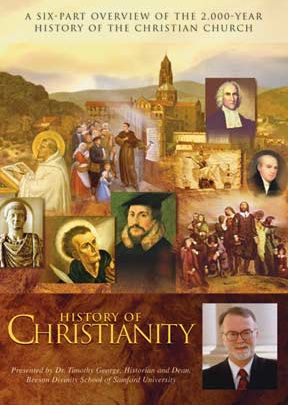 This is a survey course designed to further stimulate your curiosity by providing glimpses of some of the pivotal events in the spread Christianity and sketches of great Christian figures who have significantly affected Christian history thereby shaping the history of the world. Kit includes six half-hour programs, leader's guide, program scripts, and reproducible student workbook. Fullscreen.

PART I: The Early Church -- From the executions of Peter and Paul in Rome to the death of Augustine in North Africa, we follow the Early Church as she emerges from the womb of Judaism to survive horrendous persecution and become established in the Roman world. Explore what took place at the early Ecumenical Councils and how the great doctrines of the Church were formulated.

PART II: The Church in the Middle Ages: Quest for Order in Medieval Christendom -- During this period in history, universities, monasteries, and museums were established. The Church, with her majestic Cathedrals, joined these institutions in influencing society. But this interaction with culture was not without difficulties: barbarian invasion, crusades, the Muslim challenge. Also, during this period, Christendom was divided into the Eastern Church and the Western Church.

PART III: The Reformation: Division and Renewal Between Medieval and Modern Times -- It was an age of exploration and discovery, of art and literature. The Medieval Church, however, had placed too much emphasis on the church as an institution. As a result, the papacy enjoyed unusual power often coupled with unusual corruption. Cries of reform were heard all over Europe. The Protestant Reformation of the sixteenth century was a tremendous movement of spiritual and ecclesial renewal.

PART IV: The Age of Reason and Piety -- During the two centuries between the death of Martin Luther in 1546 and the conversion of John Wesley in 1738, the Christian world experienced a major paradigm shift from an "age of faith" to an "age of reason." On the heels of Copernicus' discovery that the earth is not the center of the universe, rose "the Enlightenment" -- a movement that shifted the focus away from God and to human creativity.

PART V: A City Set on a Hill: Christianity in the New World -- America was the land of new beginnings. Europe represented for Americans a corrupt past, whose contamination they wished to escape. This period includes the study of great traditions such as the Puritans and Quakers, and great movements such as the First Great Awakening.

PART VI: Into All the World: Christian Movement in an Age of Uncertainty -- From the fall of Bastille in 1789 (marking the beginning of the French Revolution) to the fall of the Berlin wall in 1989 (marking the end of communism), study the Christian movement in an age of uncertainty. William Carey, the "father of modern missions" carries the Gospel to India; others followed to remote regions -- people like David Livingstone, Lottie Moon, Henry Martyn, and Hudson Taylor. Explore the Christian Church as it moves into all the world.

Presenter-host Dr. Timothy George is an Historian and Dean of Samford University’s Beeson Divinity School. Trained in theology and church history at Harvard University, he has written numerous articles and books including Theology of the Reformers, John Calvin and the Church, and Faithful Witness: The Life and Mission of William Carey. George also serves as senior editor of Christianity Today.

PDFs included on the DVD:
-48-page leader's guide with background information and discussion questions
-48-page student workbook
-Scripts for each of the six programs

It takes a brave man to attempt to encapsulate 2000 years of church history in six 30-minute segments. Three hours is barely enough time to adequately explain the background information necessary to understand the rise of Christianity, to say nothing of its long and storied history. Anyone attempting to create a survey of Christian history must be able to choose and concentrate on only the most critical events and only the most important historical figures. History of Christianity, written and hosted by Dr. Timothy George, attempts to do just this. The results are mixed at times, but generally quite positive.

It has long been an observation of mine that to study Christian history in a way that is fulfilling and accurate, we must draw distinctions. We must differentiate between the many groups that lay claim to the name “Christian.” When we equate Protestant, Catholic and Orthodox, the history of the church becomes murky - difficult to understand. But when we make appropriate distinctions, the light shines and we are able to distinguish between the history of those who considered themselves Christians, and those who actually were. For example, if we understand the papacy to be at odds with Scripture, it becomes obvious why the office became so corrupt. If we understand that Roman doctrine denies the true Gospel, we can see why the church needed to be reformed.

Thus before the viewer begins this series, it is helpful for him to understand the distinctions within Christianity and to draw his own conclusions about them. For sake of brevity I will not review each of the episodes individually.

As we might expect, some segments of the series are stronger than others. I was somewhat disappointed with the second and sixth segments, but found the remaining four quite strong. The episodes dealing with the Reformation and the New World were particularly informative. The second segment, which was to take the viewer from the death of Augustine to the birth of Luther, dealt predominantly with St. Francis of Assisi. He is clearly an important figure in one particular branch of the Christian tradition, but the attention given to him led other important figures, such as Tyndale and Hus to be overlooked. In fact, these two men received only one shared sentence in the narration. Surely the men who were the forerunners of the Reformation merit more attention than that. There was no mention of the Crusades or Inquisitions in this episode or any other. The final episode continued to blur the importance of the distinctions between Catholic, Protestant and Orthodox. Dr. George speaks of the important of ecumenical efforts in Christianity, but does little to define the terms on which Christians are to unite. He uses the oft-quoted phrase, “In the essentials, unity. In the non-essentials, liberty. In all things, charity,” but makes no attempt to define the essentials.

This leads us to return to my concern with the lack of helpful distinctions. Because of this oversight I am sure that a Roman Catholic viewer would feel as uncertain at times as a Protestant or Orthodox viewer. Despite my concern about this matter, the series offers a lot of good information and will surely fulfill its purpose, which is to provide points of interest that will lead the viewer to engage in future study of the history of the church.

The disc contains several helpful extras which add to the value of the series: a leader’s guide that contains background information and study questions; a student workbook; and the complete script for each episode.

In the final assessment, then, I feel it may have been more beneficial had Dr. George written this series to appeal predominantly to one of the Christian traditions. However, this remains a helpful series and one I can recommend. It would make a solid basis for a study on the history of the church provided the leader is willing to deal with the distinctions the author overlooks. http://www.challies.com/music-movies/dvd-review-history-of-christianity 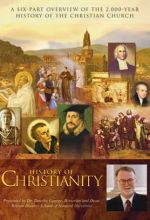