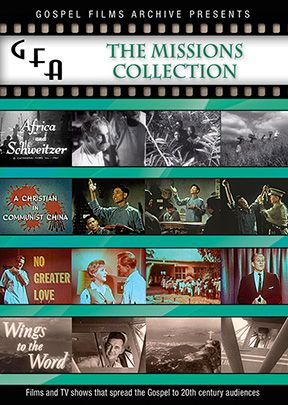 This film collection documents the profoundly important pioneer work of individuals and organizations in missionary fields worldwide. The Missions Collection is part of the Gospel Films Archive, a multi-volume collection of rare and vintage Christian movies produced in the 20th century by independent Christian producers as well as major Hollywood studios. These vintage movies demonstrate how the Christian message was communicated to 20th century audiences through visual media. They also provide a heartwarming nostalgic experience that fans of classic movies will love. Though they are from a bygone era, these films often tackle subjects that remain surprisingly relevant for contemporary audiences.

Africa and Schweitzer — 1961 - Cathedral Films / 27m — Dr. Albert Schweitzer's life and Christian missionary work in Africa are chronicled by narrator Lowell Thomas. He is photographed in the Belgian Congo at work and at play.

A Christian in Communist China — 1961 - Jan Sadlo Films / 19m — A defiant Chinese Christian pastor is discovered and horribly tortured. He escapes his captors and while in exile ponders what will become of his congregation.

No Greater Love — 1960 - Jan Sadlo Films / 30m — Richard Denning and Evelyn Ankers star in the story of a nurse who opposes her doctor-husband’s desire to volunteer for work in the mission fields.

Wings to the Word — 1951 - Protestant Film Commission / 30m — This is the true story of a young pilot and missionary to Brazil, Rodger Perkins, who portrays himself in this documentary narrated by Alexander Scourby.

The latest Gospel Films Archive release of vintage short films with Christian themes presents four shorts about missionary work in the 20th century. The first three, hailing from 1960-61, are all directed by Jan Sadlo, although aside from the blending of archival and original footage each is quite different. "Africa and Schweitzer" looks at the dedicated work of Dr. Albert Schweitzer in Africa's Congo, where voodoo was predominant until Schweitzer established medical clinics, schools, and churches. Most interesting is the haunting, mysterious, black-and-white footage that was shot by Sven Nykvist, renowned cinematographer for Ingmar Bergman. "A Christian in Communist China" tells the story of a Christian pastor leading clandestine services in a Chinese village, who was arrested, tortured, and left for dead. Eventually given the opportunity to flee for Hong Kong, the holy man does, but on the way he reflects on what Christ would have done. "No Greater Love" is built around a filmed lecture extolling the virtues of American dentists volunteering their services in Africa, with an engaging wraparound story involving a gung-ho dentist who has to convince his reluctant wife to participate. Finally, "Wings to the Word" (1951) is a narrated docudrama about a minister named Rodger Perkins, who was able to greatly speed up his work in visiting remote villages in the Brazilian mountains through the use of a flimsy-looking plane. Another solid entry in an interesting archival series, this is recommended.

These films are entertaining, very much to the point, and offer a glimpse of missionary ideas from a very different culture that existed only a short time ago. 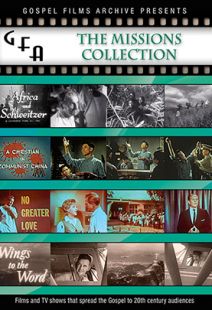