Protestant Reformation at 500 Years - Episodes 1 and 2 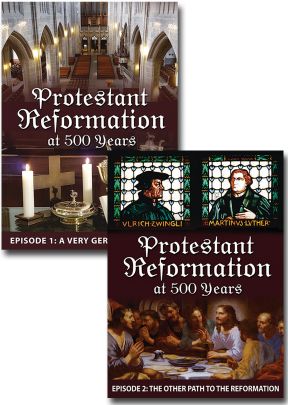 This set includes the first two episodes of Protestant Reformation at 500 Years: A Very German Protest and The Other Path to the Reformation.

﻿This series gives viewers an in-depth look at the forces and people who shaped the Protestant Reformation. It describes in detail the social and theological issues at stake in the conflict between the Catholic Church and Protestant reformers during the 16th century. Produced and directed by award-winning filmmaker T N Mohan, the series highlights the lives of the three mainstream Protestant reformers—Martin Luther, Ulrich Zwingli, and John Calvin—and shows how God used them to restore a more biblical and Christ-centered understanding of the Christian faith. Additional episodes are planned for the series.

Episode 1: A Very German Protest introduces viewers to the world of the middle ages, the world in which Martin Luther lived. It was a time of sweeping change and ongoing corruption. Against this backdrop, an obscure German Monk rose to become the spark that lit the Protestant Reformation.

Episode 2: The Other Path to the Reformation provides a brief overview of the situation in Reformation Germany, then focuses on Ulrich Zwingli and the Swiss Reformation. Zwingli independently came to similar conclusions as Luther about the need for reform in the Church, but the character of the Reformation in Switzerland differed from its German counterpart, which led to the beginnings of fractures within the Protestant movement. 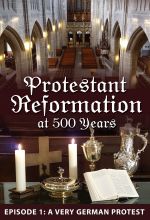 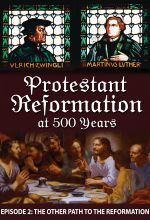 Protestant Reformation at 500 Years - The Other Path to the Reformation