Nativity: Art And Spirit Of The Creche - .MP4 Digital Download 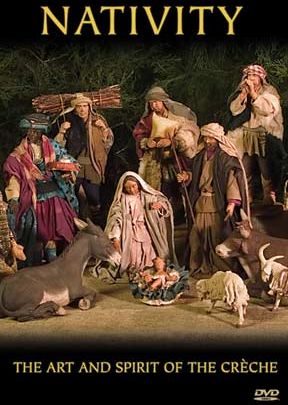 This video is an astonishing and beautiful array of nativity scenes collected from across the globe.

Here is an uplifting and fascinating Christmas special. After the cross, the Nativity scene is Christianity's most recognized symbol. Its history, art and spirituality have been embraced by cultures around the world for nearly two thousand years. This video unites theologians and collectors with an astonishing and beautiful array of nativity scenes collected from across the globe.

FEATURES:
SUBTITLED, not CLOSED CAPTIONED. You must access subtitles via DVD remote.

Backed by theologians and collectors commenting on the history, art, and significance of the Nativity scene – one of Christendom's most enduring symbols – this production features 47 examples (drawn from 25 countries spread across five continents) of the crèche collection housed at the Trappist Monastery of Mepkin Abbey near Charleston, SC. Viewers will follow how the various tableau components were added after Christianity began to focus on Christ's life as a spiritual beginning (the ubiquitous shepherd was an excellent choice to witness the birth, as they were known to be fabulously talented at spreading the news). While acknowledging several of the technical errors seen in many Nativity scenes (a wooden stable is unlikely, for instance), the production also explains how cultural and ethnic facets influence interpretation and execution, and explore the reasons why the Nativity scene has such a powerful pull on many people (ranging from the humble quality of the figures present at the event to the Holy Family subconsciously being seen as the "ideal Christian family"). Though presenting an assortment of crèche samples rich in diversity (my favorite being a wild, abstract metal sculpture), the producers unnecessarily repeat several images, but – that quibble aside – this is a well-done, bargain-priced program on an unusual topic. Recommended.

Narration tells the history of the creche, the most recognized Christian symbol after the cross, and the important place it holds in our Christmas observances. Creches from Asia, South America, and Africa are examined, as well as those from Europe and North America. Whether primitive or ordinary or ornate, each one manifests the fascination the Nativity story has held for people through the centuries.

We learn of the melding of religious meaning with artistic expression in various cultures around the world. The usual depiction of the wooden stable, for instance, reflects not the reality of Palestine at the time of Christ's birth, when the Holy Family's refuge might have been a simple cave. It reflects instead how Europeans used the wood of trees, plentiful for them, to shelter their animals.

The monks of Mepkin Abbey and the knowledgeable collector of creches provide informative commentary. This visual feast, subtly enhanced by traditional music of the season, is recommended for church libraries. - Monica Tenney

Do you remember the first time you heard the story of God as a baby? What was its impact on you? This video documentary provides the viewer with insight on the historical, spiritual, and cultural impact of the Nativity, or creche, on both the Christian Church and secular society. A variety of Nativity depictions are exhibited throughout the documentary, showing the viewer the various cultural and philosophical interpretations of the story. Maier provides the viewer with both the historical and spiritual significance of each character playing a role in the Nativity, adding that some cultures add more figures of everyday living to demonstrate the common and relationship to the average person that the Nativity story portrays, which as Maier states, "becomes our story." This work is unique as a video documentary, presenting analysis and interpretation on the historical, spiritual, cultural and artistic significance of the second most recognized icon of Christianity, the Nativity. It is suitable for academic and public libraries, serving students of art, early Christian history, Christian icons and traditions, and the impact of Christianity on culture and society. - Rodney G Birch, MidAmerica Nazarene University.