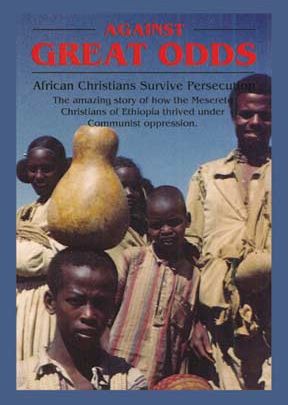 The film uncovers the secret of this amazing survival and growth under oppression It examines the growth of the Meserete Kristos Church in Ethiopia.

A great program on church growth, small groups and faithfulness in times of trial. It examines the growth of the Meserete Kristos Church in Ethiopia. In 1982 the Marxist government closed all of their congregations and put their leaders in prison. The church went underground and continued meeting in homes. After the overthrow of the Marxist government in 1991, the church resurfaced to discover that they had grown tenfold, from 5,000 to 50,000 members. The film uncovers the secret of this amazing survival and growth under oppression. A PDF study guide is available for download.

Between 1982 and 1992, the Meserete Christian Church was forced underground by the existing Marxist regime. Combining interview with church members and dramatic re-enactments, the program traces the heroic response of the Meserete congregation, as they formed clandestine cell groups for prayer and evangelical meetings in private homes. Ironically, the Meserete Church, which had some 5,000 members in 1982 grew to 50,000 members during the oppressive and dangerous decade of Communist rule. Very nicely produced, Against Great Odds is a solid inspirational title that focuses on the tenacity of the human spirit in the face of great odds. Recommended.

Mennonite Board of Missions - Paul

"Against All Odds" tells the story of a church which discovered, while adapting to the dangerous external reality of persecution, new ways to witness through small house groups. After ten years of relative isolation, the church emerged amazed with the fact that they had multiplied ten fold. This film is strong because national leaders tell the story. Their story rings with humble integrity, and it is not denomination- specific but represent a general Ethiopian reality. This is a wonderful resource for congregations wishing to become acquainted with one way God is renewing the church.

Adversity in the life of the church can be used by God in a dramatic way to bring God's people to where we are totally dependent on God's ways to sustain us. This story of the Ethiopian church is a powerful witness to what exciting things can happen when we come to the point where we are forced to recognize that whatever happens. it's in God's hands. What is learned in situations like that should never be lost. This video preserves those learnings, and challenges us to broaden our understanding of church, to be a visible church and to grow more aware of God at work in our lives and among God's people.

The Book of Acts is continuing. The growth of the church in Ethiopia is a modern day miracle -- a work of the Spirit under great suffering. You must not miss this video.

Laymen and laywomen gave leadership to a rapidly growing house church movement in Ethiopia during the 1980s when a Marxist government closed the doors of the Meserete Kistos Church. Here is their story told by them. Recommended viewing for Sunday schools, home share groups, Bible study fellowships, worship services.