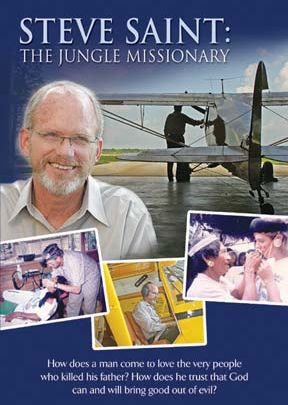 Steve Saint recalls life in the jungles of Ecuador and the events surrounding the death of his father, Nate Saint, and four other missionaries in 1956.

Steve Saint was not quite five years old when his father, Nate Saint, and four other men were speared to death in 1956 by members of the Aucas, now known as the Waodani. The five missionaries and their families had gone to live in the jungles of Ecuador in hopes of bringing the Gospel to the primitive and savage people living there. After the men were killed, Steve's Aunt Rachel and Elisabeth Elliot, wife of one of the martyrs, bravely decided to carry on their work, as they felt the need to continue the mission their loved ones had died for: to bring the light of the Gospel to the Waodani. The two women lived among the tribe, teaching them how to read and translating the Scriptures for them. As a result, some of the Waodani committed their lives to serving God.

Steve grew up among the Waodani, dividing his time between school in the U.S. and the jungle village. Upon the death of his Aunt Rachel and at the Waodani's request, Steve brought his wife and children. His experience there gave him the vision to establish I-TEC (Indigenous People's Technology & Education Center - www.itecusa.org) which helps bring modern technology to hidden groups around the world and assists them in being self-supportive and independent.

This inspiring and entertaining testimony, combined with photographs and rare film footage, is both moving and challenging. It is a captivating true story of forgiveness, Christian love and missionary devotion to God's call.

Jungle missionary Steve Saint is the son of one of five missionaries who were speared and killed by members of the Waodani tribe following a tragic misunderstanding in the jungles of Ecuador in 1956 (a story brilliantly told in the documentary Beyond the Gates of Splendor). Two of the widows -- Saint's aunt Rachel Saint and Elisabeth Elliot -- remained with the Waodani, continuing the work of spreading and teaching the Gospel, and Saint himself spent much of his childhood with them. As an adult, Saint returned with his own family to live this truly primitive lifestyle, ultimately establishing I-TEC (Indigenous People's Technology & Education Center), which brings modern technology to 'hidden' tribes throughout the world. In this profile, Saint lovingly recounts the evolution of his work from his shattered childhood to his adult activism in an interview format supplemented by archival footage and location photography that vividly depicts the vicissitudes of his amazing life. While intended as an inspirational document of Christian love and forgiveness, Steve Saint: The Jungle Missionary also offers insights into missionary culture. Recommended - J. Reed

I think it is safe to assume that most people who read this site know the name “Steve Saint.” He is, of course, the son of Nate Saint, one of five missionaries serving in the jungles of Ecuador who was martyred there in 1956. Nate Saint, along with Jim Elliot and three others, were in the midst of making contact with the Aucas, now known as the Waodani, when the tribe turned on them, spearing them all to death. After this tragedy, Steve’s Aunt Rachel and Elisabeth Elliot, Jim Elliot’s wife, carried on the work among that primitive tribe, even living among them for many years. Upon the death of Rachel, the tribe asked Steve to come and minister to them. He brought his wife and children to Ecuador and settled in among the people there, befriending and serving the very tribe who had slaughtered his father. This video, a documentary of nearly one hour, tells Steve’s story and shares his testimony. It is a great story of tragedy, forgiveness, commitment and answering the call of God. http://www.challies.com/music-movies/dvd-reviews