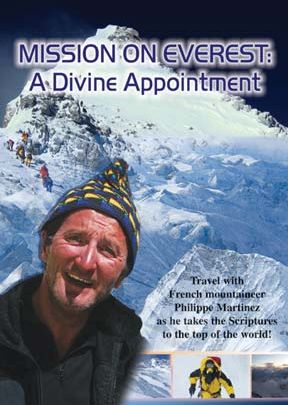 Discover the deep conviction behind the man who followed God's call to this divine appointment.

Follow along on an incredible journey to the top of the world!

On May 17, 2006, French mountaineer Philippe Martinez reached the summit of Mount Everest to fulfill a single purpose -- to take the Word of God to the top of the world.

Fully aware of the dangers of such an endeavor, Philippe, a professional mountain guide and nationally recognized mountain rescue worker, felt a divine call to make this perilous journey.

Follow along with Philippe and his team as they climb under very difficult conditions, experiencing extreme temperature changes, high winds, and a decrease in the oxygen level. Upon reaching the summit, Philippe's unexpected meeting with a civilian Israeli climber is a strong symbol, as Old and New Testament meet on the top of the world! There, Philippe prays for the nations, sings a hymn and buries his Bible in the snow, a symbolic gesture of proclaiming God's Word to the ends of the earth.

Relive this incredible experience through video footage and interviews with members of the team. It's a breath-taking journey you'll not soon forget!

French mountaineeer Phillipe Martinez had already reached the summit of some of the world's most formidable peaks - including the Matterhorn and Eiger - by the time he set his sights on Everest in 2006. But this time he was inspired by a goal higher than any mountain peak: to bring God's word in the form of the Bible to the top and plant it there as an inspiration for the world. Film-maker Patrick Vauclair's "Mission on Everest" follows the various phases of conditioning and preparation that Martinez - a professional guide and rescue worker - underwent in order to meet the challenging obstacles (which include extreme temperature changes, high winds, and reduced oxygen levels) presented in climbing Everest. In the end, Martinez is not only successful (burying the Bible and reminding us of the words of Psalm 95: "To me belong the mountain peaks says the Lord"), but he also unexpectedly meets an Israeli climber at the summit, and the pair serve as a strong symbol of the uniting of Old and New Testaments. Beautifully filmed, Mission on Everest works both as a gripping travel documentary and as a solid Christian inspirational program. Recommended. Aud: P (J. Reed)