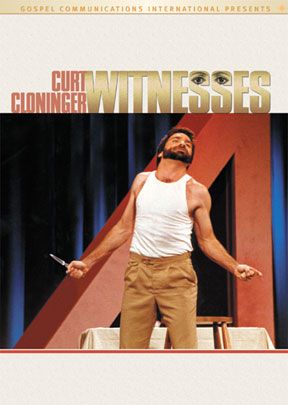 The characters, portrayed in contemporary language and dress before a live audience, include a “Bronx accented” Abe, who hilariously describes a party Jesus attended; an “Italian” Lazarus, who describes Jesus calling him from the grave; and Barabbas, who describes his reaction to Jesus’ crucifixion.

Through the eyes of these characters, both comic and serious, the audience is challenged to see Jesus from a fresh perspective.

It's the rarity of a jewel that makes it so valuable. This performance by Curt Cloninger is such a jewel. I have never seen anything like this. It's a oneman show but Curt has such literary skill and performance talent that I found it difficult to know how just one man could perform as so many different personalities so convincingly. His attention to detail is incredible mimicking people right down to their vocabulary accents and mannerisms. His enthusiasm for the subject the Lord Jesus and his knowledge of the performing arts just explode off the stage. Not only that but Curt's knowledge of social issues shows itself well in the circumstances and lifestyles of the people he so expertly portrays. I laughed I cried I cheered I even clapped while watching this in the privacy of my own home! All because of one man doing a spectacular job of sharing the imagined influence one Man had on the lives of everyday people. It's a marvelous performance captured on film of someone who's work I wish more people knew of. A jewel indeed!