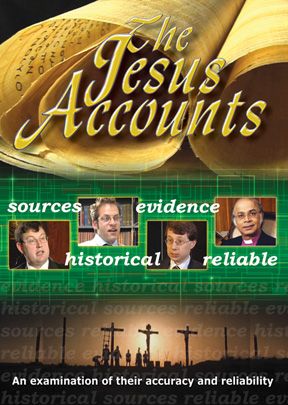 Learn how the Gospel accounts of Jesus are based on solid evidence and significant ancient manuscripts.

This DVD demonstrates how the Jesus Accounts are based on solid evidence, significant ancient manuscripts, eyewitness accounts, and much more. Here is a convincing program that provides understanding and a framework to respond to those who doubt or seek to undermine the evidence for Jesus' life and ministry. The program draws on the expertise of numerous New Testament scholars and helpfully explains the background to the spread of the first manuscripts. Filmed on location in Istanbul and the UK. A great program for believers and those seeking to understand the scriptures' teaching about Jesus.

The Jesus Accounts investigates the validity of the Gospels to answer the question, Can we trust our Bibles to give an accurate interpretation of the original manuscripts that were written so long ago? It offers evidence from ancient traditions, historians and the written accounts of eye witnesses in order to solidify the reliability of Christ's teachings. Although the graphics and acting are somewhat amateurish, this DVD provides valuable information on how the ancient teachings of Jesus became what we now know as the Gospels. Four historians explain the evidence in an intreview-style format, which is interspersed throughout the video. This DVD would be a good addition to a church library it offers solid historical accounts of the validity of the Gospels in a short amount of time, in an easy-to-follow format.

Examining biblical accounts of the life of Jesus Christ, The Jesus Accounts looks at the communications revolution that carried the Good News. Filmmaker Ronald Clements shows how early Christians produced the papyrus scrolls that were eventually compiled into the Bible --the first book to be published on Gutenberg's printing press. The intervening years between papyrus and book saw an unprecedented development in written communication, driven in part by the desire of believers to spread the Word. Supplanting fragile papyrus, parchment offered the advantage of enabling the assembly of separate documents into one volume. What emerges from studying various "copies" of the Bible (going back nearly 1,800 years, with examples here from each century), as well as writings from scholars around A.D. 260, is the consistency of the message across the different formats. The writing contained in the earliest surviving fragments (some dating to only a few decades after the original accounts were created by the apostles) is essentially the same (with allowances for different translations, from the Greek to King James and other versions) as in Bibles used today. Narration by Nick Page accompanies dramatic re-creations and footage showing the existing documents (or pieces therof), while commentary is provided by noted New Testament scholars, including Peter Head and Simon Gathercole of Cambridge University, and Michael James Nazir-Ali, former Bishop of Rochester of the Church of England.

This 30-minute film gives an overview of Jesus' life and concentrates on the four gospels. The question it seeks to answer is, "are the gospel accounts, as we have received them, reliable sources for understanding the person and ministry of Jesus Christ?" In order to answer this question, the film explores the evolution of the written gospels. It also highlights how the gospels were copied throughout the years. Included in the explanation are the various formats in which the gospels were transmitted from the earlier papyrus scrolls and books to the later parchment volumes.

This film could easily be used in a Bible study or confirmation class to trace how the writings of the gospels have been handed down to us.