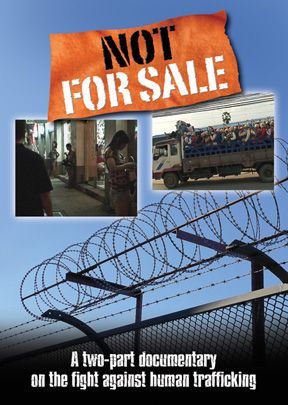 A two-part documentary on the global problem of human trafficking and the modern-day abolitionists who are fighting it.

Based on the book Not for Sale by David Batstone, this DVD covers what modern-day abolitionists are doing to fight the rampant terrors of human trafficking in the US and abroad. Traveling over 120,000 miles across five continents, Producer and Director Robert Marcarelli and his film crew gathered undercover footage on this billion-dollar industry and interviewed the heroes who are determined to see it end. Not only does the film expose harsh realities, but it also breathes new hope into the issue by documenting the valiant work of contemporary movement. Told by the people who've lived them, these compelling accounts aim to inspire individuals to practical action. (83 mins)

Tens of millions of people are slaves today. In spite of this tragic figure there are modern day abolitionists who battle human trafficking. This segment tells the story of five such heroes. Across the globe from the Far East to here in the shadow of our nation's capitol, they work to rescue victims and prosecute the traffickers. Learn how you can join the fight. (32 mins)

Due to subject matter, viewer discretion is advised. Not recommended for children and young teens.

Based on the titular book by David Batsone, this sobering documentary from film-maker Robert Marcarelli looks at the illegal trafficking of human beings and the modern emancipators dedicated to saving them. Not for Sale is divided into two parts, with the first providing extensive background information and the second serving as a direct call to action. Victim advocates estimate that 27 million people are bound in slavery today (more than at the height if the African slave trade, and half of them children). Voiceover narration accompanies footage shot on five continents, coupled with interviews of victims and those who fight on their behalf, adding a compelling personal aspect to the account. The documentary points out that individuals are forced into servitude of all sorts, including agricultural, general labor, and prostitution, the latter exemplified by the thriving Thai sex industry and the trafficking of women from Eastern bloc countries. Balancing the grim realities portrayed here are the stories of efforts made by various groups to end modern-day slavery, both by providing direct help (through means ranging from health services to job training and opportunities) and by working to change or toughen laws. The organizations highlighted include secular groups such as the Polaris Project, the International Justice Mission, and the Florida Coalition Against Human Trafficking, as well as faith-based agencies such as Foursquare Children of Promise and NightLight international tragedy, this is highly recommeneded. (C. Block)