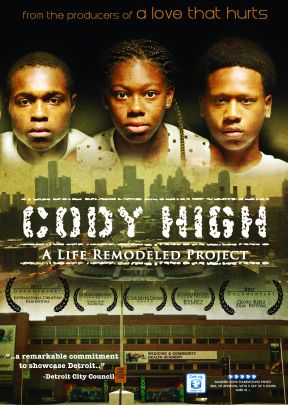 Cody High: A Life Remodeled Project focuses on the efforts of Detroit’s impoverished Cody Rouge community to remove blight and create a safe environment for students at the local schools, including the hundreds of students who attend Cody High School.

Cody High: A Life Remodeled Project focuses on the efforts of Detroit’s impoverished Cody Rouge community to remove blight and create a safe environment for students at the local schools, including the hundreds of students who attend Cody High School. In 2014, residents of Cody Rouge, in partnership with Life Remodeled, a Detroit-focused non-profit organization and 10,000 volunteers rose up to bring new life to the troubled neighborhood. Together they remodeled three schools, tore down three burned-out houses, remodeled 25 homes of students and their families, boarded up 254 vacant houses, and brought beauty back to 303 blocks of Detroit. Cody High: A Life Remodeled Project skillfully portrays the powerful stories of community members and volunteers who were involved. It documents how community institutions, especially churches and other faith based groups have mobilized the larger community to become beacons of hope within the great city of Detroit.

The Cody Rouge community of Detroit was not a place someone would want to stop in, says a longtime resident at the beginning of this spirited, inspiring documentary. Particular streets in the neighborhood were unofficially off-limits by mid-afternoon, due to brazen gang activity in an area where dozens of houses were abandoned and falling apart—a reflection of Detroit's larger problems with crumbling industries, abandonment of homes, and collapsed city services. Filmmaker Walter V. Marshall's documentary captures the incredible blight that struck Cody Rouge, especially in its schools and along residential streets, where kids were growing up with no sense of purpose, joining gangs for survival and a sense of family. Along came the nonprofit organization Life Remodeled, which took a holistic approach to rebuilding the community both literally and spiritually. Cody High tells the story of a massive effort to fix the schools and a number of houses, clean up and beautify the streets, and even refurbish a football field (including acquiring used goalposts from the Detroit Lions). But this was not just about structural improvements; Life Remodeled also helped create or restore programs for kids, with local mentorship providing direction. It's exciting to see Cody Rouge discover a newfound pride in this upbeat film about helping to lift people out of chronic hopelessness. Recommended.