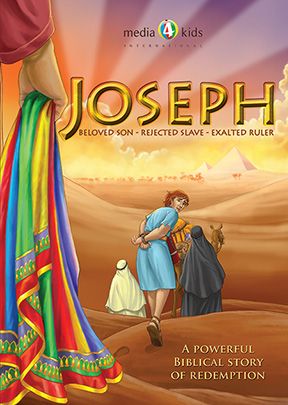 The thrilling Biblical story of Joseph is told in this high quality 3-D animated feature film for children ages 5 and up. Young Joseph is a dreamer, indulged by his father and resented by his older brothers who soon sell him into slavery without their father's knowledge. Now captive in Egypt, Joseph experiences humiliation, hardship and imprisonment. But his faith and his gift for interpreting dreams soon lead him to an exalted position in the kingdom. When his brothers come calling for help, Joseph responds in a surprising way. The program sets Joseph's story in the context of God's plan for Israel and the promised coming of the Messiah. It powerfully demonstrates God's sovereign hand in all things.

Joseph: Beloved Son, Rejected Slave, Exalted Ruler is an animated feature film for all ages, based on the biblical story of Joseph. Spoiled by his father and resented by his brothers, Joseph was secretly sold into slavery by his jealous siblings. Yet Joseph's life in slavery gradually sparked a change in the young man, teaching him humility and obedience to God. His gift of interpreting dreams makes him the one person who can decipher the pharaoh's nightmares, and use that knowledge to protect all of Egypt from devastation. A profound parable of faith, forgiveness, and redemption, Joseph: Beloved Son, Rejected Slave, Exalted Ruler is a welcome addition to Christian household and church DVD libraries.

This animated feature geared toward children recounts the Old Testament story of Joseph, who receives a glorious coat of many colors from his loving father and then is secretly sold to a slave trader by his jealous brothers, before finally becoming a leader and patriarch. The narrative begins with a prophesy during a dream, as Joseph foresees that even the stars will bow before him—a vision that further alienates him from his siblings, who already resent his favored position in their family. Joseph's journey through life results in humility and deference to God, as he goes from the position of favorite son with riches and status to being stripped of everything and having to start again in Egypt, where—following years of slave labor and imprisonment—he eventually earns approval from the pharoah, saves his people, and reconciles with his brothers. Presented in both English and Spanish, and featuring excellent animation and compelling voice work, this is highly recommended.

I watched Joseph with my 5-year-old daughter and we both loved it! She was so invested in the story she got upset when Joseph's brothers sold him and was even more emotional when they arrived in Joseph's court in Egypt. When Joseph forgave his brothers and they were reunited she was crying for joy so hard she couldn't even talk. Needless to say, this movie connected with her in a very real way. Weeks later, she continues to ask me questions about the Bible story. This is a great resource for parents or anyone wanting to teach children about the Bible.

This excellent quality animation tells the biblical story of Joseph in a way that is accessible and engaging for all ages. Through his pride and fear, trials and successes, perseverance and growing trust in God, we see Joseph as both a fellow human being we can relate to and a hero we can learn from. Just as his father Jacob learned at Bethel, Joseph also learns and encourages us to see that God is with us, even when we are not aware of it.

This movie was beautiful. From the first moment we opened the package, my kids were all over me to hurry up and watch it. All of them, from the sixteen year old to the ten year old remained interested in the story throughout the viewing as well. They were intrigued and excited to see that many of the things we had just read about in the Bible were featured in the story. As we all know, previous Hollywood adaptations may have skipped over or changed some things for dramatic license. This film did not do that. What I loved the most was that as we were watching it, my kids were not only comparing it to the Bible, but it also made them think even deeper about the story. I heard them asking questions like “Can you imagine what the brothers are thinking at this moment?” or “What do you think Joseph imagined would happen when…” That, to me, makes for excellent entertainment. Especially when there is a Biblical connection and a chance for the kids to learn more about how God works. This film was well done, highly entertaining, and engaging on a level I hadn’t expected. Every family should want to keep a copy of this in their library to supplement their own Sunday School, church, or school lessons. It’s definitely a valuable resource and more than that, the kids love it!

Let me start out by saying that this movie is practically flawless. The animation is perfect. The people actually walk like people and the backgrounds are just dazzling. It is a thing of beauty to behold. Then there is the directing by Robert Fernandez. He does a masterful job of moving the story along without any pauses or lags, keeps us totally interested in everything that is going on and tells the story exactly. Then there is the Biblical story of Joseph. I do not know who wrote this screenplay but whoever this person is did a spectacular job and deserves much credit. It is not just the story it is all the action behind the story that is played out so well. With every thing that happens to Joseph we see him changing and being molded by God until he becomes second-in-command of Egypt. We see him splintered from his family and then restored back to them at the end and oh what a triumph that is. Everyone should see this movie! Families should sit down together with their bowl of popcorn and/or chips and dip, watch this movie, and then discuss it when it is over. I recommend this movie highly!

Blooming with Books - Perfect for homeschoolers, Sunday school, and the home setting

I was recently offered the chance to view and review Joseph: Beloved Son, Rejected Slave, Exalted Ruler. This video is an excellent way to share the story of Joseph with the little ones in your life. Opening with Abraham receiving a vision from God about his descendants and their servitude in a foreign land. At the time Abraham had no children about which the vision could be about. We are then taken forward 170 years, witnessing Abraham's great-grandson Joseph receiving a gift of a coat of many colors. We see Joseph's pride in his position of favoured son and his brothers' resentment. And we see the moment when his brothers decide that they have had enough of Joseph. Going from favoured son, to hated brother, to foreign slave within a few hours time Joseph's life takes a sudden and dramatic change. We see Joseph's pride even in Egypt until a remark about his pride opens his eyes to the sin in his own heart. A noticeable difference in Joseph's attitude brings about a change in his position as a slave until he is betrayed by his master's wife. When Joseph's gift of interpreting dreams is revealed to Pharaoh, God's hand is again revealed in his life. Pharaoh's dreams are the means of bringing Joseph's family once gain into his life. This is an excellent teaching tool, perfect for homeschoolers, Sunday school, and the home setting.

I really enjoyed this story. I think children from 5 up will enjoy it as it tells the story of Joseph. We see how he goes from a favourite son to a slave to an important official to Pharaoh. We see how God works through Joseph. I like the way the film has been made and the animation is well done. A would recommend this for families who want to share Joseph's story. 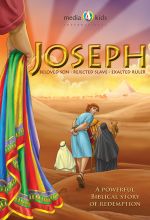