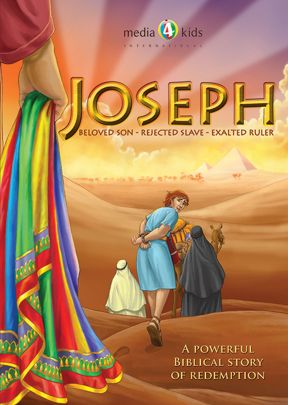 The thrilling Biblical story of Joseph is told in this high quality 3-D animated feature film for children ages 5 and up. Young Joseph is a dreamer, indulged by his father and resented by his older brothers who soon sell him into slavery without their father's knowledge. Now captive in Egypt, Joseph experiences humiliation, hardship and imprisonment. But his faith and his gift for interpreting dreams soon lead him to an exalted position in the kingdom. When his brothers come calling for help, Joseph responds in a surprising way. The program sets Joseph's story in the context of God's plan for Israel and the promised coming of the Messiah. It powerfully demonstrates God's sovereign hand in all things.

Joseph: Beloved Son, Rejected Slave, Exalted Ruler is an animated feature film for all ages, based on the biblical story of Joseph. Spoiled by his father and resented by his brothers, Joseph was secretly sold into slavery by his jealous siblings. Yet Joseph's life in slavery gradually sparked a change in the young man, teaching him humility and obedience to God. His gift of interpreting dreams makes him the one person who can decipher the pharaoh's nightmares, and use that knowledge to protect all of Egypt from devastation. A profound parable of faith, forgiveness, and redemption, Joseph: Beloved Son, Rejected Slave, Exalted Ruler is a welcome addition to Christian household and church DVD libraries.

This animated feature geared toward children recounts the Old Testament story of Joseph, who receives a glorious coat of many colors from his loving father and then is secretly sold to a slave trader by his jealous brothers, before finally becoming a leader and patriarch. The narrative begins with a prophesy during a dream, as Joseph foresees that even the stars will bow before him—a vision that further alienates him from his siblings, who already resent his favored position in their family. Joseph's journey through life results in humility and deference to God, as he goes from the position of favorite son with riches and status to being stripped of everything and having to start again in Egypt, where—following years of slave labor and imprisonment—he eventually earns approval from the pharoah, saves his people, and reconciles with his brothers. Presented in both English and Spanish, and featuring excellent animation and compelling voice work, this is highly recommended.

I watched Joseph with my 5-year-old daughter and we both loved it! She was so invested in the story she got upset when Joseph's brothers sold him and was even more emotional when they arrived in Joseph's court in Egypt. When Joseph forgave his brothers and they were reunited she was crying for joy so hard she couldn't even talk. Needless to say, this movie connected with her in a very real way. Weeks later, she continues to ask me questions about the Bible story. This is a great resource for parents or anyone wanting to teach children about the Bible.

This excellent quality animation tells the biblical story of Joseph in a way that is accessible and engaging for all ages. Through his pride and fear, trials and successes, perseverance and growing trust in God, we see Joseph as both a fellow human being we can relate to and a hero we can learn from. Just as his father Jacob learned at Bethel, Joseph also learns and encourages us to see that God is with us, even when we are not aware of it. 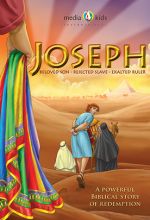