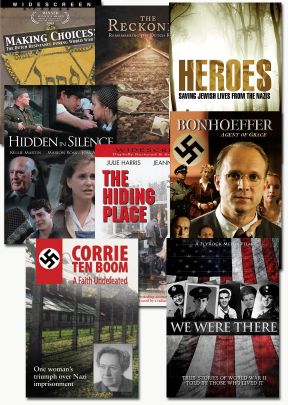 Set includes: Corrie ten Boom: A Faith Undefeated, Bonhoeffer: Agent of Grace, The Hiding Place, Hidden in Silence, The Reckoning, We Were There, Heroes: Saving Jewish Lives from the Nazis, and Making Choices. As seen in Citizen Magazine - Cit0517

The HIding Place — In wartime Holland, Corrie ten Boom and her family of watchmakers quietly sheltered Jews in their small house—until Nazis discovered the "hiding place" and arrested them all. This is the gripping, true story of Corrie and her sister's endurance in the horrors of the Ravensbruck death camp, and their sure hope that God is the true hiding place.Starring, Julie Harris and Jeannette Clift.

The Reckoning — Remembering the Dutch Resistance. Stories from Holland of survival and courage during the Nazi tyranny of World War II.

We Were There — We Were There captures the voices of America’s greatest generation, as they share their stories of duty, service, and responsibility during World War II. While the tumultuous global events of the early 1940’s provide the backdrop for this film, it is the men and women recalling their personal stories who take center stage. The lives and experiences of these veterans from every branch of the service quickly become the heart of this riveting independent documentary. Color and B&W.

Heroes — During World War II the residents of a remote region of France resisted the Nazis and their collaborators thus saving the lives of thousands of Jews and other refugees. Hear the heroic stories of bravery and mercy from those who were there.

Making Choices — A moving and well crafted first hand account of four Dutch survivors of the 1940 Nazi invasion of Holland who helped protect total strangers from certain death. Hear their stories of fear and courage, danger and faith as they put their lives on the line to do what they thought was right.

As seen in Citizen Magazine - Cit0517